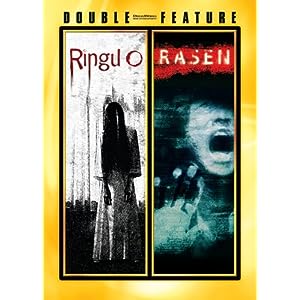 It was bound to happen and as you can tell by the inventive title Ringu 0 that this fourth entry into the Ringu franchise is a prequel to the original Ringu. There was so much back story to the curse of Sadako that the Ringu franchise was a prime candidate for prequel status. Like I've mentioned in reviews before I'm not a whole hearted fan of prequels, despite their popularity, due to the fact they tell a story that's main elements have already been told in previous films and that not much is left up to surprise. Like I expected Ringo 0 comes out completely predictable.

This entry tells the story how Sadako became the vengeful spirit she was in the previous films. Right away the film has definite different look compared to the other entries. Those films go for a sharp, polished look where the filmmakers here decide to go for a grainy, washed out look with some dirty close-ups. I believe this is the way filmmakers tried to make the fill look older compared to Ringu as it takes place 30 some odd years before those events. In any case I like the new look as it gave the franchise something different to look at. The film has our vengeful ghost Sadako pre-death, looking cute as a button and attending some theater college. She of course is very odd and quiet and the other students don't take too kindly to her. One day the lead actress of the play dies suddenly so the director picks Sadako to take her place. A nosy reporter does some investigating and discovers that Sadako has some special ESP powers and her, along with the theater crowd, decide to kill Sadako. Since you've already seen Ringu and Ringu 2 (and god forbid Rasen), then you already know how this film is going to end.

The whole film I got flashes of Carrie going through my head. You have the girl that doesn't fit in, a young boy that falls in love with her despite her awkwardness, and a vengeful psychotic parent. Substitute the prom for a play on opening night and you have the Japanese version of Carrie. Most of the film takes place in a darkly lit theater house so don't expect many interesting locations. The cast for the most part, especially Yukie Nakama as Sadako, are very good and keep that rather humdrum predicable story from becoming boring. Though there is one plot element that tends to bug me. It seems all these Ringu sequels have to have a least one plot element that becomes a thorn in my side. Towards the end of the film they talk about how Sadako has an alter ego that physically splits from her and they become two entities. I found that plot element ridiculous and the story would have benefited better without it. But then again it seems the writers of these films always have to throw in at least one ridiculous story element as if they were trying to drive me mad on purpose!

Fans of the franchise might be disappointed as this really isn't a ghost story and we only see Sadako in her vengeful state for a short period of time at the climax of the film. The plot again is derivative of Carrie and it is extremely predicable, mostly because we know what the outcome is going to be thanks to this being a prequel. Despite this the cast give the film their all filling it with good performances and director Norio Tsuruta does his best to keep the film moving trying to make-up for the derivative plot. Overall I didn't dislike the film and it kept my attention but this film will only be of interest to die hard fanatics of the franchise.

Bonus Rant: I do not understand the subtitle "Birthday." I don't recall anywhere in the film mentioning that it takes place on or around Sadako's birthday. Could the term "Brithday" refer to the birth of the curse? That doesn't really make sense either as characters are already talking about being cursed before Sadako is even murdered. Perhaps this is why Dreamworks Entertainment removed the subtitle from any of the DVD box artwork because most people, me included, wouldn't understand what it meant.

Written By Eric Reifschneider
Posted by DarkReif at 8:30 PM