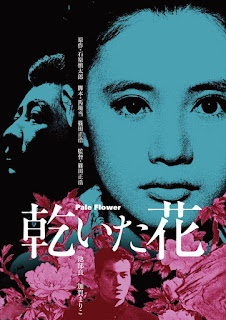 Muraki is a Yakuza member fresh out of prison after some years spent behind bars due to completing a hit for his boss. Once out, he returns to the city and settles back into his local gambling den, where he meets a young woman named Saeko, hard on betting all the cash she's got. He becomes infatuated with this alluring woman and the two form a very destructive relationship with one another, in this gangster film which is less about the action typically associated with the films of that time and rather a brilliant character study on the animalistic nature within us all.

Pale Flower is without a doubt one of the finest films of all time, and yet one of the most under looked and almost unspoken of as well. The small group of people who I know that are in appreciation of this masterwork have all reached that decision based on my trying to cram this into the eye sockets of every film fan I know. Whereas I like to recommend a film, and usually leave it at that, I would stand upon the highest stage possible and preach this to all!

What makes this film work first and foremost is the outstanding performances from its to leads. Ryō Ikebe gives a subtle look at a hardened gangster who has fallen out of the circle since exiting prison. He is still very well feared and respected by his colleagues and the locals, but you can sense him an urge to leave that lifestyle behind. He wants to break free and become a 'normal' man once again, but he simply can't. His job is the monster that will always follow right behind him with every step he makes for the rest of time. Mariko Kaga as the beautiful and curious Saeko, demands attention in her every scene, arresting the viewer with her entrapping gaze. The eyes of this woman are something else and a large part of her excellent performance is channeled through them. She can achieve so much by just the way she glances or looks dead on with someone. I believe this is what created Muraki's fascination with her and ultimately cause him to follow her down her destructive path. I don't want to get too much into what happens, as the journey and where it leads are the most rewarding parts of the film.

Technically speaking, this movie fires on all cylinders. From the high contrast black and white noir visuals that give the look of the piece a stylish timelessness, to the jazzy score that bleeds into the nihilistic atmosphere which drips from every frame from start to finish, this is easily one of the best looking films I've had the pleasure to lay eyes on. It feels much ahead of its time visually, save for the use of moving backgrounds during a particular car chase sequence of sorts, but that doesn't deter any quality overall in this feast for the eyes. It has some of the most interesting and powerful use of close-ups of the actors that I have ever witnessed. Akira Kurosawa always said you can pull so much more from a performer, depending on how you light there eyes, and let's just say the gazes given here is a recurring motif that further impacts the way we feel for these characters.

The climax and most important scene of this film becomes its most memorable, and is one of the most chilling scenes in cinematic history. The musical score, the visuals, the acting, editing, everything just seems to come together and peak at this key moment. It's one of the few scenes to send chills through my body the moment it is thought about and is arguably one of the finely constructed sequences of all time. I don't like throwing that phrase about so lightly, but I can bet everything on almost anyone completely loving this film. It is fairly nihilistic but there is so much gravitas here and a director working at his most controlled and well calculated. It is the level of craftsmanship that most artists would only ever dream of achieving and Masahiro Shinoda did it. I've actually been skeptical to further explore his filmography in fear of being let down. If he has made anything else that even remotely comes close to the level of perfection Pale Flower has, then I may have to rethink what I know about film and restart it all.

To not repeat myself for the hundredth time, and to wrap things up, I challenge any film goer to walk away from this one unimpressed. It's a dark tale, but it is inspiring on so many levels. It pushes me to further myself in what I do as a storyteller and makes my standard of quality for cinema all that much higher. Ryō Ikebe and Mariko Kaga have some of the greatest onscreen chemistry that any couple ever has, albeit in a much different vein than your typical romantic affair. If your looking for a film that screams cool, prepare to go completely deaf by the levels this reaches. You have been warned! Drop what your doing and see this one right now.