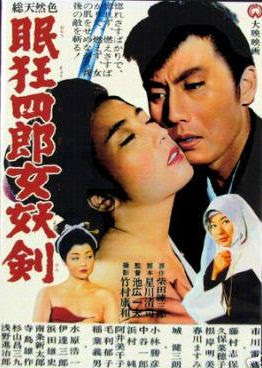 After back to back entries that more than impressed, I feel like I was riding on a Sleepy Eyes of Death high, ready to consume more and see if the series could keep up its energetic and impactful run. The fourth entry, Sleepy Eyes of Death: Sword of Seduction, is a film that in concept should be ranked up there with Full Circle Killing and Sword of Adventure, but is held back by a scattered script. It’s one of those films that is overflowing with a multitude of fantastic sequences and ideas just begging for a cohesive movie to put it all together which it sadly never accomplishes. For fans of chanbara films or the series, there is plenty to adore about Sword of Seduction. The film as a whole, on the other hand, leaves something to be desired as it randomly leaps plots to be as entertaining as possible.

Kyoshiro Nemuri (Raizo Ichikawa) as always, is minding his own business when his other worldly sense of karmic doom strikes him. Dead girls wash ashore, an old frenemy shows his face, and rumors of a virginal saint being hunted by the anti-Christian task force all seem to be connected. Yet, Kyoshiro is unsure of how it fits together. When he’s seemingly roped into all of this, his sword and killer instincts may be the only thing to untangle a mystery that’s leaving more dead bodies in its wake than he ever has.

While I know that this series is based on some famous written works about the adventures of its lead character, Sword of Seduction is the first film in the series that truly feels like a condensed version of a book that’s translated to film. I'm not even sure if it actually an adapted story, truthfully, but it feels like it. In many ways, this film is much more akin to the first entry, The Chinese Jade, than the others as it tries to craft a larger mystery on hand where our hero must use his auteur detective skills to navigate the threads and uncover the villains behind it all. The problem is that too often the film feels inherently disconnected. There are three plots initially introduced, the insane princess plot, the drug smuggling plot, and the Christian persecution plot, and we are left to assume that they are all threaded together somehow. While, yes, they are connected as that is revealed in smaller bits of dialogue and plotting, but it’s loose and thin at best. Instead of each connection being a small revelation for the audience, they are treated like subtle building blocks for something even larger. That big unveiling of the ultimate goals never comes. Instead, Sword of Seduction feels like a series of random sequences tied together in loose off handed dialogue or character beats that ultimately undermines the depth and emotional toll that it could have generated. It’s somewhat disappointing.

That being said, Sword of Seduction has some amazing sequences contained in its brisk runtime. Director Kazuo Ikehiro, another fantastic addition to this series and Zatoichi alum, handles these sequences like each one is the highlight of the film and it makes for some amazing and memorable key moments. Some of them are dark and gritty, the manner that the Japanese task force tortures and torments the Christians for their beliefs, and some of them are pulpier action affair like a few assassination attempts on Kyoshiro while he’s on the road to find a saintly nun in hiding, but the finale marks one of the more visually appealing and fantastic moments of the entire series thus far. Kyoshiro must battle smugglers on a boat backed by a fiery sunset and reveals the anti-heroics that make his character so intriguing to watch in a final duel of egos and personalities. It’s easy to see why fans of the series rank this one so highly when an audience looks at it in this regard. It’s almost brilliant.

There is potential for Sword of Seduction to do some deeper and more thought provoking material in each of its plots, but because it jams in all three and threads them together it takes away most of the power from each. Still, this seems like the kind of film that will certainly grow on me as time goes on, but for now it seems like a step back against the second and third film of the series. It’s piled with some fantastic sequences that strike home like a deadly slice from Kyoshiro’s sword though, but ultimately this feels a tad disappointing in its lacking efficiency and deeper emotive resonance. Fans will still love it though.

Written By Matt Reifschneider
Posted by DarkReif at 3:27 PM