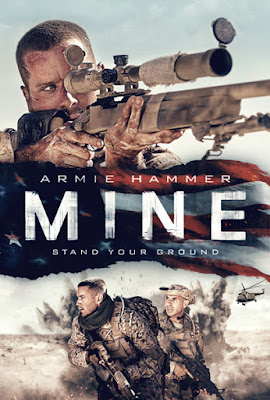 When it comes to household names, it’s not like Armie Hammer is a truly obscure one. The guy has been the star or co-star of some major films (some of them major flops like Man from U.N.C.L.E., but I digress) and I would consider him an A-list star or at the very least on the verge of being an A-list star. Which was why I was a bit perplexed that Mine, his latest starring venture, went VOD and then to home video via Well Go USA. It’s not like all star vehicles are instant theatrical releases as some of them love to do their indie productions, but this one was a dramatic military thriller and on paper would have been a solid choice for counter programming to perhaps a large family friendly animated feature or something. After finishing Mine though, I kind of get it. It’s not your usual military style film and its limited scope tends to breed a more artistic and indie film crowd than the usual big-boom-spectacle wanted from the genre. It’s also a mixed effort ultimately that attempts to do some lofty and grand things, but tends to get caught up in its own narrative. This, of course, lends itself more to the VOD structure and thus, the release style makes a lot more sense.

Mike Stevens (Hammer) is a sniper stationed out in the desert on information that a target will be appearing in the middle of nowhere for specific and unknown reasons. The mission goes awry though and he is left, along with his spotter Tommy (Cullen), to cross the desert to get to an evac in a nearby village. Things are never as easy as they seem though and soon the two find they have wandered into an abandoned mine field and Mike gets a little stuck…with his left foot right on top of a mine.

It seems almost fashionable for these A-list starts to do a film that requires them to shoulder almost all of the film’s dramatic performance. Ryan Reynolds did the phenomenal Buried, his wife did the weirdly entertaining The Shallows, and now Mr. Hammer tries his hand at the style with Mine. After the opening act that establishes his character and his situation, courtesy of some decently natural exposition from his spotter Tommy, the film gets him planted on a mine and leaves him there for the majority of the run time. The initial worry with a film like this is that at a buck forty-five in run time it will get boring, but the writing and direction of the film keeps things decently diverse thanks to some thrills as he fends off wild dogs in the night and plenty of hallucinations in the third act from dehydration. So, one again, on paper there is plenty to love about Mine. It adds in plenty of backstory about his life with a running theme about marriage that adds enough artistic flair to keep it interesting enough. For a film where a man is stuck with one foot in the same play for three-fourths of the play time, Mine works to keep things interesting for its audience.

Of course, that only goes so far and Mine definitely needs some trimming to be the most effective it can be. Despite the best efforts of Hammer and the directors Fabio and Fabio (Guaglione and Resinaro respectively), the film just feels drawn out and disconnected. Some of it has to do with the artistic manner that it plays with its timing, although I would argue that when the hallucinations begin in the third act that this is when the film shines in an often-surrealistic manner, but most of it has to do with the lack of tension. After a solid and tense opening where our two soldiers and their mission go south, the film tries to keep things pushing and pulling when it comes to the tension. Yet, this is a film about a man on a land mine. There should always be this sense of dread, time, and pressure (especially as a parallel to the pressure he must keep on his foot) to sell it. Too often the film lacks that. It attempts to throw in some humor with a local man that visits Mike on his mine and says cryptic and nonsensical things, which of course all play out into the themes in some eye-rolling manners in the end, but the push and pull just isn’t as effective. There are definitely moments, the wild dogs and hallucinations that make the audience look elsewhere at the tension and then come back to only be reminded of the current mine problem, but the film just doesn’t keep it ratcheted at the level it needs to be.

In the end, Mine is decent thriller with lofty ambitions as a film that earns a lot of praise for that. Armie Hammer is admirable in the role and gets better as the film progresses while there are some truly edge of your seat moments that hooked me as a viewer. As a whole though, Mine just feels a bit misguided in its writing and cohesive narrative to be the effective and artistic thriller it wanted to be. It doesn’t keep the tension at a big and loud 11 and tends to drag out far too much in some of its secondary plots. Fans of the indie dramatic flick will want to see what it has to offer though and I can recommend it for those intrigued by its concept. It’s interesting and a solid film, but one that had the potential to be something spectacular.

Written By Matt Reifschneider
Posted by DarkReif at 8:14 AM