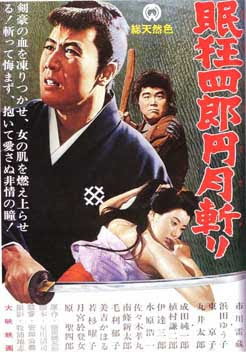 When a niche genre becomes over-saturated, there tends to be a lot of lost classics in the mix. Unfortunately, the Sleepy Eyes of Death franchise – despite getting a nice box set release in the US years ago – has seemingly fallen into being one of those classics that have faded. I say unfortunate because even by three entries in, this series has solidified itself into classic status, forming a tight bridge between the more entertaining exploitative elements and a sharp artistic depth. The third entry, Sleepy Eyes of Death 3: Full Circle Killing continues on the path set up by the previous entry in blending the two sides of a chanbara film into an effective action film with quite a few messages to be said. While it doesn’t quite hit the heart and humanity of the previous one in that balance, it’s still impressive to watch and one that will not disappoint fans of the genre.

Nemuri Kyoshiro (Raizo Ichikawa) stumbles upon a young man testing out his sword. Testing it on some helpless farmers that is. When he interferes, he unwittingly entangles himself in a much larger conspiracy that has the locals ready to riot and a lot of the Shogun’s heirs dying in strange accidents. Can he unravel the conspiracy before the body count gets too high or will he end up at the sharp end of an assassin’s sword?

After the success of Kenji Misumi’s take on the franchise with the previous entry, Sword of Adventure, it was a sigh of relief that Full Circle Killing would go find another underappreciated director to helm this film. While Kimiyoshi Yasuda delivered one of my least favorite Zatoichi films, he also delivered a few of my favorites so as long as the story was good then I was sure he could bring the goods.  Full Circle Killing delivers on almost all fronts too. In a way though, Yasuda is perhaps the one reason that this film succeeds. It’s very much a fluid and cohesive film, taking the entertaining values of a hack n’ slash film and injecting them with enough depth to make sure it’s a filling AND entertaining experience. The visuals are downright moody and effective, thanks to some particularly impressive cinematography and lighting, and even when the film gets a bit silly it never goes as far as to be distracting from the story being told. A prime example is the finale which is the big sword fight (as all of these films have) and how it is set to the backdrop of a massive burning bridge. Ninjas turn up, plenty of people die, and Kyoshiro is his cold and almost nihilistic self the entire time. In someone else’s hands this could be inherently cheesy, but with the work put into the film in its build and with the skillful movement of Yasuda it remains effective and emotionally draining…while still featuring ninjas and a burning bridge backdrop. In many ways, the ability for Full Circle Killing to balance it like that makes for a film that resonates loudly.

Like the previous two entries, Full Circle Killing is hinged on Raizo Ichikawa and his performance of the anti-hero Kyoshiro. And like those previous entries, he nails it. From moment to moment, one isn’t sure which way he may turn to kill one person and spare another or vice versa. The film builds into that a bit further with some truly tense sequences including a few scenes with the young soon-to-wed girlfriend of the film’s arrogant and off the handle villain and it makes for an intense watch. This also bleeds into one of the major themes of the film, class struggle and tension, as Kyoshiro remains a sort of shadow between the two. Respected like a high class citizen for his unbeatable sword and yet living among the people as a wandering rogue figure. Time and time in Full Circle Killing his role as a ‘in-between’ class figure plays into how the plotting progresses and adds a lot of commentary into the mix about the rights of a social status and the good and/or evil of such. The film doesn’t quite play into the human side of his character quite as effectively as Sword of Adventure did, but it adds in enough to further explore his character in a way that is different and still impressive.

Full Circle Killing continues to show the strength of this franchise and why it continued for so many entries. It uses its entertaining and easy to consume concept of ‘a wandering swordsman who stumbles into trouble’ (not unlike the Zatoichi franchise) to tell layered stories of class struggle that’s populated with dense and fascinating characters. It’s brimming with great set pieces of action that is expertly executed while never straying too far from the tried and true formula. If the Sleepy Eyes of Death series continues to be this good, I’m eager to leap into the fourth entry sooner rather than later.