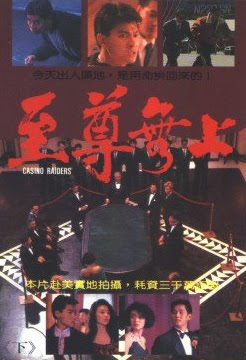 The interesting approach that Wong Jing and company take to Casino Raiders is that it combines two popular genres of HK cinema into one film: the gambling thriller and the heroic bloodshed action flick. The first two acts are almost solely dedicated to the former though as Alan Tam and Andy Lau play two gambling pros who help casinos catch cheaters and do a little cheating themselves to earn some extra cash. Their Chang Cheh style brotherly bond forms the heart of the film and as it goes it tends it add in a lot of material that seems irrelevant at first. A strange romantic triangle is formed with a rich beautiful young woman, they get into melodramatic fights, and eventually both of them end up on the short end of the stick as the film progressively gets darker as it goes. The flow at this point is a tad uneven as it adds in a lot of material about their relationship with one another, backstories, and the romantic plot and truthfully I wasn’t fully sold on the film even after the first two acts. It felt like Wong Jing doing his thing with some strong casting, but without a lot of weight behind it.

Then the third act happens and boy, oh, boy does it take off. By the time the two characters have their falling out with broken hands and drinking problems to boot, the film was starting to show its true darker tones. When the third act finally gets moving it goes full heroic bloodshed and soars featuring some fantastic action sequences and one of the most intense gambling finales that I’ve witnessed as I explore Hong Kong’s gambling film niche. It throws in a handful of fantastic twist and turns, taking all of the seemingly irrelevant material from the first two acts and spinning it into something dynamic and at times heartbreaking. Not to mention, the final minutes of the film are ridiculously powerful if one is invested into what Casino Raiders is offering. By the time the credits roll, I was hooked into this film being one of those massively overlooked cult classics that not nearly enough time is spent praising. It’s dynamic and powerful when it wants to be while never giving up on its entertaining elements. Casino Raiders is a gem of the era. 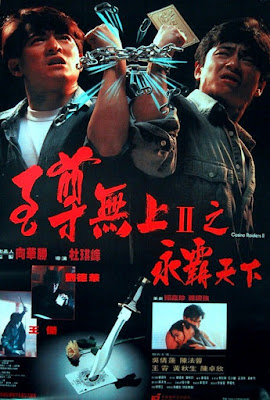 With no connection to the original Casino Raiders, but still supporting a phenomenal cast and the directing talents of Johnnie To, my hopes for this name-only sequel were definitely high. Like the first one, Casino Raiders II features a patchy script made much more effective by the talents on screen and its director. The story this time around centers around a fabled piece of Jade handed down by the God of Gamblers and whomever wields it can be champion of gambling. It’s silly, but the film does the right thing and does not take it into fantasy territory like the actual God of Gamblers series, but uses it as a kind of tool of deception for its characters which is a very smart maneuver. From there, it builds up its down and out team of gamblers and their long-standing rivalry with a powerful gangster like gambler who has destroyed their lives. This approach breeds a lot of melodramatic power, for better or worse, and unlike the original tends to be purely embedded as an action thriller with gambling plot devices. The film throws a lot at the audience, including a ton of secondary plot lines that never fully feel developed (particularly with Andy Lau’s Chicken Feet – yes, that’s the character’s name – and his romantic and often weirdly abusive relationship with his girlfriend) and it dives into some cheesy territory which can hinder the overall experience. It does have some fantastic plot twists in the second half that keep things very interesting for fans.

The true reason why this film works though is the talents of Johnnie To. Don’t get me wrong, the performances are great with nods to the two leads Andy Lau and Dave Wong (along with a memorable crazy performance from Anthony Wong as the villain’s henchman), but there is a dynamic to the visuals that really makes this film pop. He uses light and great use of music to really pull the more silly dramatic pieces out of being cheesy and into actually being emotional. A very silly scene where Andy Lau gives CPR to his girlfriend on a dock is set to a series of random explosions in the background, but it weirdly works without being unintentionally hilarious and that’s the talents of Johnnie To at work. So in the end, Casino Raiders II is still a mixed bag like the original, but it retains a strange and effective balance of genre spins and effective execution that raises it above its apparent flaws. It’s another film that’s more for fans of Hong Kong action thrillers more than the gambling films of the era, but it’s one that gets a hefty recommendation nonetheless.