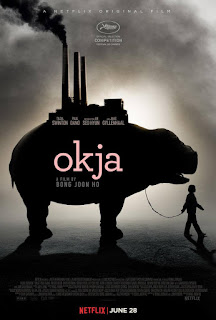 Acclaimed director Bong Joon-ho (Memories of Murder), who sky-rocketed to international acclaim with his first international feature, Snowpiercer, which featured an all-star cast from all over the globe, told fans that due to its success that he immediately had two new features in the works; one being an even bigger feature with an international cast and crew in mind, and another being a tighter-knit, more intimate feature back in his homeland of South Korea. Obviously he chose to run with the former firstly, and that comes by way of the enormous streaming and entertainment service, Netflix. Now, I won't be getting into my opinion of the company, as that isn't the focus here, but only to say that apparently a lot of directors are finding comfort in knowing that they can do their next big project through this service, which has been producing films for a few years now, and have complete creative freedom and control. When I first heard that Bong of all people was going this route for his new film, I admittedly was against the idea, but alas, here we are, and let's just focus on the overall finished product at hand, no pun intended . . . Okja!

In 2007, a woman by the name of Lucy Mirando, succeeds her father in his passing and takes over as CEO of his company, Mirando Corporation, where it is revealed that she and her team have been working on breeding and genetically modifying pigs to create a new sort of superpig, as they dub it. Twenty-six of these piglets are sent to farmers throughout different countries across the globe, with the intention to see them grow in their new environments, only to be collected in ten years, as only one will be crowned the supreme superpig. Our leading creature resides in South Korea, where and old farmer and his granddaughter, Mija, these ten years later, have brought up the titular Okja, into a loving and useful pet. It is clear from the get-go that Mija loves her Okja and that bond cannot be broken, no matter what. Naturally, the Mirando Corps. baffoons come up the mountainside where the little family enjoys their life, and things only make a turn for the worse there, as they round up Okja to take her to Seoul, where she will be transported over to the United States for the competition, but something sinister is going on behind the scenes, and that is all I can say without truly ruining things going forward. 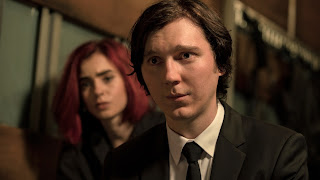 First off I want to say that this film is an absolute blast. It's fun, adventurous, and has some nicely filmed action scenes. Couple that with some sweet moments, and a darker turn in its final act, and you have all the ingredients for a perfect popcorn flick. Unfortunately, there are things in the whole of it all that don't seem to mesh so well. I feel that even with a running time of two hours, that Okja never has enough time to develop some of its many side characters as fully as Bong has done in his works prior. While the performances are fine all across the board, a lot of these players that the film lays out for us are just unrealized and sometimes even uninteresting. I really enjoyed Paul Dano's character Jay, the leader of the ALF (Animal Liberation Front), who has a large established group of like-minded individuals set out to combat the heinous intentions Mirando Corps. has in place for Okja and the other superpigs. I think he gives a fine performance, and I was more on board with him and his intentions than the other sidekicks at his disposal. Steve Yuen was fine as well, but again, it seems there were too many characters to juggle and try to flesh out in such a short time and it just doesn't work. Maybe the intent is just for them to be these disposable tools that help bring Mija closer to saving her beloved animal companion, but aside from herself, I just wasn't so into any of the characters, which is a problem I've never faced before with the director's other outings.

Another thing that bothers me is that some of the humor resembles elementary potty humor. The poop and fart jokes are funny at first, as Okja is an adorable animal, so no matter what she does it is still cute, but as things heighten for our hero, they just don't seem to be in place with the tone. I do love the cartoonish characters throughout and thought that Lucy Mirando (Swinton) and Dr. Johnny Wilcox (Gyllenhaal) were both very, very memorable villains. They aren't your typical bad guys by any means, but they do have an unforgettable presence to the both of them that I think fits well in the world that Bong has crafted. I enjoyed the over-the-top yet eerily familiar circus like tone that the scenes which took place in America and how they played out. Were they loud and aggressive and almost otherworldly? Yes, but again, it feels almost a little too much like home, but I'm not here to jump into that massive topic.

The heart of the movie though, which ultimately saves it from being just mediocre, is the incredible relationship and performances by Mija and her Okja. Okja gives off some Totoro vibes and that is a wonderful thing for me as I never thought I'd see another fantastical creature hold such a special place in my heart as that Miyazaki creation, yet here we are. I adored Okja and like most who have seen this film, I absolutely wish I had a superpig of my own. She is lovable, silly, and most importantly cares very deeply for Mija and will do everything in her power to protect her friend. I can't get too into specifics, again for fear of spoiling, but there are a plethora of absolutely beautiful and touching scenes the two share together and if you don't walk away at least moved by these two, especially towards the end of the film, then, well... maybe you are a sad sap, but I digress.

I could type endlessly about Okja. I really did like it overall, but I can't say that I loved it in the way that I have the director's previous works. I would go as far as to say that it is my least favorite of Bong Joon-ho's feature films, but that is not to discredit it, as I think it is truly a great entertaining movie, but it just doesn't quite reach the heights that I had hoped it would. I feel it could have worked better as a lengthier series for the streaming company that produced it, to better chisel out those characters, but given certain things and how they have gone, I can most certainly see this story of a brave little girl and her superpig continuing, and I can safely say that I would most definitely be willing to continue this journey with them. See it and decide for yourself. I think it is a safe bet that most will be entertained by it, but perhaps the hardcore Bong Joon-ho fans will be left with a little more to desired.