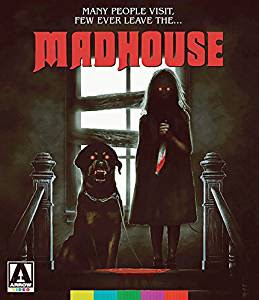 “Most people’s nightmares end when they wake up. Mine begin.”

It starts off with a very wide shot. Blackness with a vague picture in the middle and some slight movement. A slow, creepy and somber version of Rock-a-Bye, Baby is sung as the picture draws closer to the viewer. It shows two young girls, one pushing the other in a rocking chair, before it takes a drastic turn as she repeatedly bashes the other one in the face with a stone. The tone of this opening is engaging and symbolic for a lot of the themes that Madhouse will explore over the next hour and a half as its audience is slowly brought down into an increasingly shocking nightmare. At the core of what this Italian and American co-production offers isn’t necessarily one that will rock the foundations, but there’s an admirable quality to the approach that easily lifts it above so many of its peers. So it’s not all that surprising Arrow Video finally decided to give it the robust collector’s edition in the US and UK. It’s truly one of those films that time and the mainstream horror community has forgotten when it deserves more attention than that.

Julia (Everly) has established a nice life for herself. She has a wonderful job as a teacher at a school for the deaf and hard of hearing and a doctor for a boyfriend (MacRae). Her childhood was not so great though and her twin sister Mary (Biggers) has been held in a hospital for years being cared for by Father James (Robertson). Now her sister has escaped and she plans on celebrating their birthday together no matter what…and no matter who gets in the way.

Perhaps it was because I was always under the impression that director/producer Ovidio Assonitis was known for making knock off flicks of other more popular horror films, but I had no idea that he could possibly direct a film that had enough of an artistic slant as Madhouse does. On top of that, there seems to be a lot of reviews and opinions that are…not so positive for this film. Lower expectations definitely give rise to pleasant surprises and that’s exactly how I felt about Madhouse. It adheres to the tropes enough to be easy to consume, but adds in enough fun twists and depth to its thematic material to be a fulfilling experience to match its entertaining qualities.

Often enough, Madhouse is referred to as a slasher film and, while that’s true to a certain extent, the film owes a lot more to Italian style and atmosphere than I’ve seen people give it credit for. It’s formulaic as it follows a good-natured young woman who, in an attempt at mending some forgotten bridges, seemingly walks into a trap set by her now disfigured and insane sister. It hits a lot of the main beats in this manner as various friends and acquaintances are killed in slasher-ific ways leading up to her birthday and for those just looking for a slasher flick it’s easy to see why they would be slightly disappointed. Nothing is truly revolutionary here in that manner, although the use of the dog as a killing instrument feels intense and somewhat inspired, and even some of the twists tend to be pretty predictable as one gets into the third act. The finale is often compared to fellow slasher Happy Birthday to Me from the same year, but I think some of the negative comments come off as a bit unfair as it doesn’t quite feel like the knock-off sequence that so many claim it to be.


The key for Madhouse’s success arises from director Assonitis and his Italian flair that he brings to the entire thing. Instead of just binging on clever kills, a dynamic villain, and a pure heroine that so many slashers do, this film approaches it with a much more atmospheric intent and plays things a bit looser in tone that expected. The use of vague backstories for our main heroine appeals to the mystery that the plot embraces and the reveal of the twist is done in a fun manner that continually builds even after the audience realizes what is happening. The performances are spot on for what they need to be, in particular the roles of Father James and Julia’s sister Mary are screen devouring when they need to be both in over the top manners and in subtlety, and Assonitis loves to toy with audience expectations as he goes about delivering the slasher elements that fans come to expect from these films.

Considered one of the Video Nasties in the UK originally, this Arrow Video release of the film would seemingly be the iconic version to own. It certainly helps that I never had to sift through terrible VHS or DVD versions of the film that are cut or feature terrible audio/visuals to appreciate it. The look and sound of the film is sharp and the restoration is to their usual caliber of material. Like many of the Arrow Video releases, Madhouse is relatively stacked when it comes to special features including a handful of new interviews with cast and crew, but the highlight of this one is in the form of the audio commentary by The Hysteria Continues. Audio commentaries are always a great way to experience a film in a new and enlightening way, but The Hysteria Continues make it a fun experience as it seems like you’re watching the film with a bunch of fellow horror fanatics who are seeing the film again with fresh eyes. It’s a remarkably fun commentary that adds another layer of entertainment to the package.

Madhouse may continue to get lukewarm reviews from critics and fans alike, but for this reviewer it’s a massively pleasant surprise. It adheres to the laws of slasher-dom, yet approaches it in an Italian stylistic manner that adds a lot of depth to the proceedings that I never expected to be there. It may not rewrite the book on how to make a horror flick, but Madhouse executes it with enough fun, flair, and focus to make it one of the bigger surprises in my viewing queue so far in 2017. It comes with a hefty recommendation for fans of the genre. 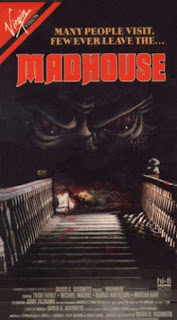 Written By Matt Reifschneider
Posted by DarkReif at 9:35 AM