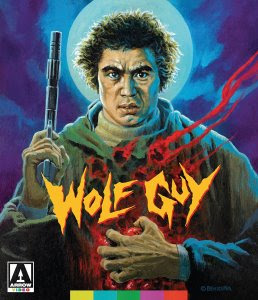 Seeing as Wolf Guy had not previously had a US release (in any format that I’m aware of, although if anyone knows you’re welcome to comment,) I was going into this newest Blu Ray release from Arrow Video blind. Sonny Chiba is always a selling point for me and the idea of having a werewolf action thriller from the 70s certainly perked my interest. Beyond that, this was going to be a full on blind run. Although I certainly expected Wolf Guy to be strange from its concepts, I had no idea just how off center and bat shit insane it was actually going to be. This film is utterly and truly outrageous in every aspect. In this regard, Wolf Guy (the full title is Wolf Guy: Enraged Lycanthrope) is massively entertaining for those looking for it even if the film itself is horrendously hit or miss in its execution of such. It’s a give or take kind of scenario, but go into Wolf Guy with the right mindset and one is most certainly going to come away entertained if nothing else.

When Akira Inugami (Sonny Chiba) stumbles across a panicked man attempting to outrun a tiger that no one else can see, he’s lead down a strange mysterious path to a young woman who is somehow murdering those who wronged her in the past. The trick of it all is that Akira is a strange man himself, a werewolf from a long gone tribe, and his investigation will soon have much greater consequences than he could have planned for.

To properly align one’s expectations, it should be known that this is really unlike any other werewolf film I have ever seen. Mainly because the horror elements are embedded into an action oriented, science fiction tinged detective story, but also because it refuses to adhere to the tropes of the usual werewolf flick. More or less, Wolf Guy could easily be described more like a funky 70s, Sonny Chiba powered version of Wolverine, where instead of metal claws he uses karate and intense glares while randomly bedding women and trying to help drug addicts while avoiding an evil government who is hunting him down. That’s just the tip of the iceberg in how strange this film gets. Invisible tigers, flashbacks in black and white, substantial moments of exploitation in gore and nudity, and a narrative that has trouble even keeping up with it all. The way that the film is approached, both in writing and direction, is strangely unpredictable throwing a ton of strange items at the audience at a rapid and frantic rate all the while taking itself deadly serious. Truth be told, I spent almost the entirty of the film with a massive smile on my face and was massively entertained by the outrageousness before me.

However, despite the enjoyment I got out of Wolf Guy, it really is difficult for me to call it a good film. This is one of those times that I wish I could give a film two ratings, one for enjoyment and one for actual quality, because for all of the things listed above that make it feel unique, strange, and enjoyable, it’s also those things that hinder the film from being cohesive, thoughtful, or even cinematic at times. The unpredictable nature of the film is more or less illogical, leaping from idea to narrative to idea to narrative with little regard for flow and legitimate development of plot and characters. While Chiba is able to ground the lead role with his charming intensity, it’s hardly a character really worth following and he’s surrounded by a series of characters that seemingly pop up and out without much effect. It’s not like I expect a whole lot out of director Kazuhiko Yamaguchi from the other films I’ve seen of his in the Stray Cat Rock series, the Karate Bull Fighter series, or the Wandering Ginza Butterfly films, but those even seem much more cohesive and layered than compared to what this has to offer. They all certainly contain their fair share of exploitation and entertainment value, but this is in its own league.

Fortunately, Arrow Video’s release of the film makes it fully worth the purchase for those looking for it or for those even remotely curious about its insanity. New interviews with both the director and Sonny Chiba are welcome features (as is the writing in the booklet which really digs into the context of this film in a more historical setting), but really it’s the new hi-def transfer that makes this. Compared to some of the screen shots I’ve seen of original releases or bootlegs of the film, it’s a miracle that this film was treated in such a manner let alone to get collector’s release in the US.

All in all, don’t necessarily judge this film by the score I give it at the end of this review. Yes, this film in a classical cinema sense is a mess. The narrative is sloppy, the characters are two-dimensional, it’s weirdly series for how outrageous it is, and it’s downright illogical. However, that being said, Wolf Guy: Enraged Lycanthrope is also one of those films that I will watch again and again and again and again, show it to all of my friends for how insane it is, and continue to praise it for the sheer ludicrous nature of it all even if it’s horrifically flawed. It’s a film meant to be consumed and worshiped by the B-movie connoisseurs that Arrow Video caters to so perfectly and, for those people, Wolf Guy is the perfect addition to the collection. 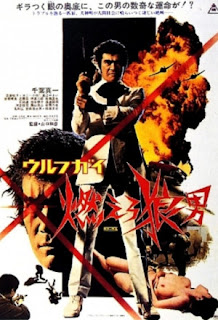 Written By Matt Reifschneider
Posted by DarkReif at 10:49 PM