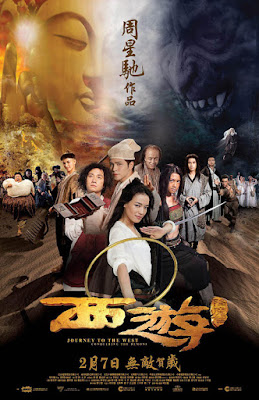 JOURNEY TO THE WEST: CONQUERING THE DEMONS (2013)

Stephen Chow made a name for himself with his oddball comedic talents initially, balancing heartfelt and awkward in even stride as both an actor and a director. As time has gone on though, he honed his abilities to craft films that not only delivered on the entertaining elements of his style, but ones that emotionally resonated well above and beyond the norm. In this regard, many people feel that the highlight of his career resides in one of his most well-known films, Kung Fu Hustle, but after re-watching his epic franchise launch pad, Journey to the West: Conquering the Demons, it’s hard for me to call it anything other than the best accumulation of all his talents as a film. Perhaps not a masterpiece, but very damn close.

Perhaps it’s because Conquering the Demons feels like a true accumulation of everything he has touched on in his career. This film will not be defined by one genre, let alone half a dozen, as it goes about telling a kind of “origin story” based on the classic Journey to the West lore. It features everything that one would expect from a Chow film: ridiculous and cartoonish elements, humorous broad characters, nimble performances, and heartfelt emotional balance, but it also dives into some epic visuals, dark and horrific moments, and intense fantasy style martial arts. The film navigates all these things in often shocking and impactful ways, steering around potential plot holes like a precisely guided sprint while building its characters into the plot in inspired ways. It even throws in a well developed and weirdly inspired romantic angle into the entire thing without feeling forced at all, a huge compliment to Chow as a director and writer that uses his cast to brilliant effect.

Occasionally the spotty CGI hinders some of the fun of the film and it’s not afraid to throw things at the audience that feel a tad out of left field (including some rival demon hunters at the end of the third act and in the finale that pop up) but the audience is having so much fun with it all I’m not sure it’s much of a complaint as a slight hiccup in an otherwise perfectly executed film. Journey to the West: Conquering the Demons not the most efficient film of his career, but it might be one of the most ambitious and for that it’s easy to overlook some of its minor flaws. For fans of Chinese fantasy films, this might be the true cream of the crop. 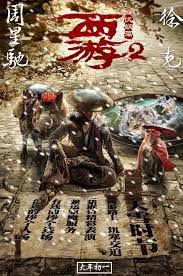 JOURNEY TO THE WEST: THE DEMONS STRIKE BACK (2017)

As mentioned above, the first Journey to the West seemingly only gets better with time and it was the talents of writer/director Stephen Chow that really make it work. The main problem that Journey to the West 2: The Demons Strike Back has in matching the original? No Chow in the director’s chair. Now, it’s not like Tsui Hark is a terrible choice to replace him. He’s super experience in big budget fantasy films and his following in certain circles is as devout as Chow has. With Stephen Chow remaining on board as the writer and a producer, The Demons Strike Back wasn’t going to be instant shit storm that everyone seemed to think it was going to be. At least, not to me.

Fortunately, it’s not, despite what most mainstream reviews and fan backlash claims it to be. Disappointing, sure, that was somewhat expected, but it’s not awful. It helps immensely that Stephen Chow remains on as a writer and producer and his fingerprints are all over the film including how it replicates the obvious three act arch in the narrative and its often random tangents of humorous or horrific tones that seemingly come out of left field. Our heroes first demonic encounter is a forest house filled with spider-lady things and it has some very creepy visuals that blend into the cartoonish nature of the film, as an example. The Demons Strike Back remains charming enough in that manner and Tsui Hark remains decently true to the style of the original as he goes about directing this massive film. This sequel, in true sequel form, attempts to be bigger and bolder in its visuals and action where the second major CGI driven sequence of the film, one where the snarky and moody Monkey King must battle a toy demon, is fuckin’ massive in scope. In this way, The Demons Strike Back works as popcorn entertainment powered by the fun nature of its characters and the sheer absurdity of its plotting and visuals.

However, the one place where it lags is the fluidity between tone shifts and the emotional resonance needed for the audience to fully buy into the fantastical action and comedy on hand. The original film was sly with its romantic plotting and careful development of our lead hero Monk, but there is a bit too much at any given time to truly run that emotional and heartfelt current. The key anchor for the film is the rather fun brotherly bond that is being developed between Wu Kong the Monkey King and the Monk, but too often the plot gets in the way of those sequences truly working as well as one would hope. The perplexing choice to recast all four of the main characters in the film also feels a bit off putting (particularly since I just watched the first one right before this) and while both Kris Wu and Kenny Lin are solid in the roles, they don’t ever seem to gel and retain the same screen presence as their predecessors in the original.

In the end, yes, Journey to the West 2: The Demons Strike Back is a flawed film and doesn’t quite strike that balance and charisma that makes the original one so impressive, but it’s also not entirely a lost cause. It’s fun, the villains and cartoonish design are silly and effective balance to our strange hero and his demon friends, and the combination of Tsui Hark’s direction and Stephen Chow’s writing is still charming and visually dynamic. Fans of the original should definitely keep their expectations in check, but The Demons Strike Back is a decent sequel. Even as an uneven movie, it’s still better than most of the current Monkey King films that are dominating the Chinese box office.