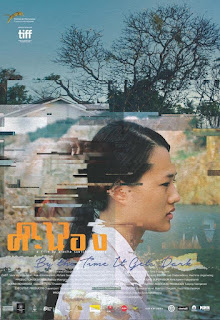 The biggest surprise of the year so far comes by way of a cryptic Thai arthouse film that no one seems to be talking about, By the Time it Gets Dark. The continuing thread throughout this layered and fragmented narrative is a protest that occurred in October of 1976, by a group of young universities students attempting to stand for democracy under the weight of a ruling fist at the time. We see a group of students lying face down on a cold floor as soldiers with guns walk around them. Photographers appear and begin to take photos, though they are from our time. There is no time travel or anything, but the film has a meta-fictional approach from the get-go.

We move forward to present day, as two women; one a filmmaker (played wonderfully by Visra Vichit-Vadakan), the other being the subject of a documentary, whom is also one of the protesters from '76. The two are staying out in a remote house in the countryside to work on this film project. The conversation between the two and what we find out about the protester and her past are both beautiful and chilling. The things people go through for their ideals and beliefs and at times ultimately end up laying down their lives for have always amazed and scared me at the same time. As personal a film as this is for the director herself, I never like to get too personal on reviews, as not to detract from the material itself.

Relatability has always been something that people look for in films, and while some of my favorites are full of people completely opposite of me, it is nice to find yourself connecting with someone onscreen. The director character here, who has strong Jeon Do-yeon vibes, in both looks and performance (which is a HUGE compliment from me), reminded me of myself in ways. As an aspiring filmmaker, I find myself, while disagreeing at times, often lining up my ideologies with her very own. Why do we make films on extraordinary people? Maybe, perhaps, it is because of how mundane our lives are, that we create stories based on others who have experienced fulfilled and purposeful lives. It spoke to me in great depths, and while I said I wouldn't bring myself into it, it is very hard not to with this one.

A friend of mine, who I spoke with online about this movie, as he is the only person in the world I know who has had the pleasure of seeing it, says he spoke with Anocha after a festival screening, and that this was a very personal project for her, and took her years to complete. That piece of information really shows during and upon reflecting this piece of work. You can see into her mind, sometimes vaguely and at other times in a very exposed manner (the scene of the female director walking through the woods comes to mind). I always love movies like this, that jog your mind and make you think. It never tries to be mind-bending or anything by way of gimmicks and out of place characters, but instead displays inner thoughts through smaller moments. Some of the events seem mundane, but I love the slow-breathing nature throughout. Slow, yes, but reflective and thought provoking at once.

Eventually, the narrative abruptly switches its characters and story and focuses on a young actor (Arak Amornsupasiri), looking for his next big film role. People seem to know him, but more so for his looks than anything. I really don't want to dive in too much here, because admittedly, this is where the film began to go a bit over my head at times. I want to revisit as soon as possible to try and understand more of what I missed or didn't even think of the first time around. I think it focuses more on the issues of isolation and loneliness that even the most surrounded by people face. I sort of feel it reflects modern society in general, but perhaps my interpretation is off a bit.

Shifting to the film's more technical aspects, I want to start off by praising the cinematography on display. Absolutely stunning imagery, drenched with gorgeous lighting, exquisite framing, and some beautiful long takes. There is one shot in particular, and again going back to the director character from the first half, where she places herself in front of her own camera. She is center of frame, like a webcam confessional of sorts, a vlog if you will, and she begins to share a very personal story from her past. As the scene progresses, the camera begins to slowly move and close-in on her. As the dialogue becomes more revealing here, so do her emotions, and by the end of the shot, she is framed in a more stylized manner, reflecting that meta-fictional style throughout the entirety of the movie. It feels as much as a documentary as it does a standard narrative, and I think that shot and scene in general, really encompasses that to the fullest. While I am not musically inclined, I will say the score is quite nice and adds to the overall tone and feel of it all, never becoming intrusive.

To wrap things up, I think By the Time it Gets Dark is a truly unique cinematic experience and one of the best films I've ever had the pleasure of viewing. I believe it is a masterpiece, and one that I will only grow more fondly of and have a deeper appreciation towards as time goes on. It touches on so many things that I didn't even get to in this review, such as history and how it is impossible to recreate and capture it without actually haven been there, to name just one of many. I need to explore more of Anocha's works, and I finally have someone to praise from the land alongside Weerasethakul. I could go on and on about this one, and perhaps I have too much here, but this is a masterful film and presents me with possibly the greatest question that I could have taken away from it all: How much fantastic Thai cinema is out there, and where can I find it? See this one as soon as humanly possible. It's one of a kind.