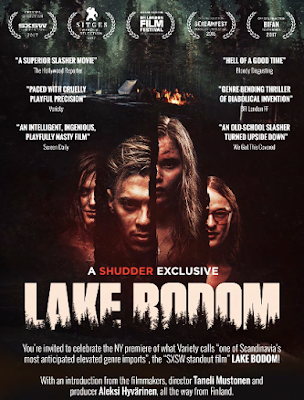 The hype machine that I had tapped into was all about Lake Bodom since I first saw the trailer for the film well over a year ago. It looked like a sharp, fresh feeling slasher and seeing as I already was well aware of the local Finnish legend it was pulling from (thanks to being a huge fan of the band Children of Bodom) I was ready to dive right in. Thankfully, after some time waiting in North American distribution purgatory, Lake Bodom finally got a US release via Shudder. While the film is not necessarily one that is going to hitting truly unique marks for horror fans in originality, Lake Bodom is a pretty effective and fun slasher, bending tropes and modernizing the long repetitive genre with a modernity that fans will definitely enjoy. It’s not quite the immediate classic that I was hoping, but it satiates the cravings for a slick slasher that I wanted from it.

Much of the success of Lake Bodom is due to the execution of the concept and the twists it injects into the usual slasher formula. Truthfully, any slasher worth its weight in celluloid is going to have one decent twist in its sleeve for the sake of gimmick, but in a manner similar to what Greg McLean used in his iconic modern horror flick Wolf Creek, this one is about the execution of the twist (or is it twists?) more than the angle itself. Director Mustonen crafts a visually slick film with incredible production values and the performances are remarkably heartfelt, effective, and believable even when the script seems to be slipping into eye rolling slasher territory – including an entire plot point that’s based around leaked nude photos of a character at a party. It’s occasionally obvious where the plot is heading and slasher fans will call the ending (and most of the third act) by fifteen or twenty minutes into the film, but the somewhat vague dialogue, intriguing characters, and slick visuals make the trip a lot of fun nonetheless and lift Lake Bodom above the standard that the genre is known for. While it’s not perfect and not nearly as gimmicky as one would assume, Lake Bodom still marks itself as a gem of the slasher genre in a modern climate that has little interest in taking any film of this ilk seriously. Horror fans will most certainly enjoy what it has to offer. 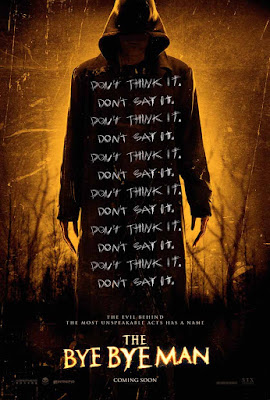 All my friends and fellow critics who had seen The Bye Bye Man in theaters warned me. ‘Worst of the year!,’ ‘You’ll be offended at how bad it is!,’ and so on and so on. Still, I’m a glutton for punishment when it comes to B-movies of the horror variety so I popped it in when it finally hit home video and I have to admit…yeah, they were all right. The Bye Bye Man is truly one of the worst films I’ve seen this year and not just for horror. It’s a massive disappointment too considering how intriguing some of the concepts are. How does one botch a larger budget horror flick that takes inspiration from A Nightmare on Elm Street and Candyman? First off, you completely make everything about it forgettable. There is one scene where the leading young man becomes confused by his girlfriend calling him a different name (I guess a big piece of the villain’s game is making people paranoid enough to kill one another, which is not such a bad idea on paper) and I honestly couldn’t remember what his name was to begin with. No clue. The characters are bland, forgettable, and when they start adding in new ones later on like Carrie-Anne Moss as a detective it was just adding in more flavorless fodder for the slaughter. That’s how this whole film goes about its thing. Just by-the-numbers plotting with by-the-numbers characters slathered in by-the-numbers scares. Yawn.

Truly, the potential is there. Intriguing idea about spreading a curse simply by saying it aloud, there are some fun moments spoiled by poor execution, and the film seems more interested in knocking off other popular horror franchises (a train sequence is completely a Final Destination moment) than it is about establishing its own identity. It just has no soul. Not only that, but the film is obviously butchered down from a more violent version that takes away any sense of consequence from the series of events. If I don’t care about the people, the plot, or the ending then it’s a little hard to give a shit about the movie at all. I’d definitely recommend this film as a huge ol’ skip even for horror fans. 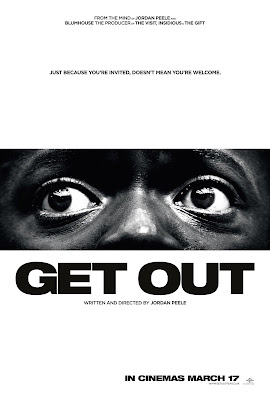 Originally, I wanted to write a full review for Get Out instead of capping it down to just being a portion of one of our Blood Splatter articles, but I came into the film well after its release and well after it already received ALL THE PRAISE. Such a highly praised film can actually make me skeptical, but now that I’ve seen it I must also admit that it deserves ALL THE PRAISE. Mostly because a) I had no idea Jordan Peele would come out of the gate as a director in this kind of manner and b) the film is so well executed that it easily rises above its cheesy elements to be something far more artistic than it may have looked on paper. If those two things aren’t strong enough indications of how good Get Out is, I’m not sure what would be.

Truthfully, I have only small nitpicky things to detract from the perfect score that we have the option to give and most of those are not worthy of mentioning in this review perhaps outside of how the film needs to occasionally throw in a flashback to make sure we understand some of the themes it is gunning for. It’s a mainstream horror…err…social thriller I guess is what it’s being called…so it’s somewhat expected. The rest of the film is an edge of your seat ride with a razor-sharp focus and brilliant balance between commentary, gimmicks, and dark humor. At times the film feels like the perfect modernization of the Rod Serling approach to social commentary in genre form with Jordan Peele using the narrative and visual clues to slowly build tension and unease until its brutal finale. The performances are subtle and emotionally effective to bring in its audience and the manner of which the clues (both subtle and obvious) are fed into the plot makes it an impactful watch…even if you know what is going to happen in the end. Only once in every half decade or so does a horror film come out of the gate with such an ambition and everyone that’s a horror fan owes it to themselves to see it.