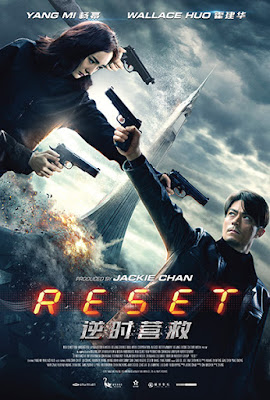 After seeing the original trailer for Reset, I was not sold on the film. Its concept seemed gimmicky and the look and tone of the film seemed off kilter a bit from that initial impression. The fact that it was produced by Jackie Chan didn’t really catch me either. Just this year Jackie Chan “presented” the terrible action flick Amnesia (a loose remake of Who Am I? with a silly and generic US re-title,) so I wasn’t sold on that either. The Well Go USA trailer for the film made it look slightly better, but I wasn’t convinced that Reset would be a great film by then either.  Yet, despite some massive flaws and a very, very rough start to the film, Reset wasn’t nearly as terrible as I feared. In fact, by the end of the film I was having a lot of fun with just how silly it was as a B-grade style action thriller. Now, I’m not going to say that Reset is a great film by any means in the rest of this review, but it feels like one of those movies that will garner a strange and dedicated cult following in ten years as a forgotten piece of highly entertaining popcorn cinema. For that, I must give Reset some credit.

Scientist Xia Tian (Yang Mi) has spent years with a team developing a system that can send materials and living tissue through a partial worm hole into “the past.” However, as they are on the edge of breaking new ground, her son is kidnapped. She must give up her research for her son’s life, but when things go horrifically wrong her only choice is to use her prototype machine to send herself back to stop it all from happening.

Time travel movies can be some of the best and worst that science fiction offers as a genre. Or the best of the worst in the case of  Jean-Claude Van Damme’s Timecop. Partner that with the gimmick of ‘resetting events to stop a tragedy’ that has become a massive trend in popular cinema lately and Reset seemed more and more like it was going to trip on its own feet before it could actually do or say much of anything. Judging from the first 15 or 20 minutes in the film, it seemed like the film was going to be a horrific chore to work through. It vomits out ridiculous amounts of exposition, piles on a lot of sappy melodrama, and features a ton of silly “future moments” like when our heroine mother goes digital rock climbing with her young son. Reset, in just the opening act, was trying much too hard and it was already tripping into its own plot holes before they even formed. You know, time travel and alternate dimensions or whatever they decided was silly enough to get an audience to buy into the gimmick.

However, as Reset goes about its business it only gets stronger. I would still argue that the film takes itself much too seriously throughout and doesn’t embrace its B-movie agenda nearly enough to make it as entertaining as possible, but Reset does an admirable job at putting together a momentum and fluidity of events that keeps the audience running with it as it throws some ridiculous things at them. By the time the finale shows up, which features a fantastic set of twists and turns that any B-movie would love to pull off, I was hooked and loving what this film had to offer. The performances get delightfully odd, including our heroine whom plays three different timeline versions of her character at any given point in the last 30 minutes, and there are some remarkably effective action sequences and emotional set ups that keep it all afloat. There’s a fantastic handful of chase sequences that work despite some patchy CGI and the manner that the narrative tries to avoid its own plot holes and it’s remarkably fun to watch. This is pure B-movie foundations that’s approached like it’s award winning material and that combination is kind of effective in the end as it just drops pretenses and starts running with its own ridiculousness.

It's easy to see though that Reset is going to end up with a lot of negative reviews and scoffing from cinephiles thrown in its direction. It does take itself much too seriously at times and fails to embrace the silliness of its premise and characters to devote itself to being the entertaining popcorn flick that it actually is which often creates a film that is uneven from one scene to the next in most of its pieces. However, the film builds some effective momentum as it goes and delivers a solid set of thrills and exciting sequences to make those with an open mind appreciate what it does do well. Reset is an entertaining blast with just enough cheese and convoluted seriousness to make it a cult favorite in the future. This is definitely not a film for everyone with its popcorn cinema approach to its science fiction thrills, but it’s a solid way to burn a couple of hours. Not great, but not terrible either.