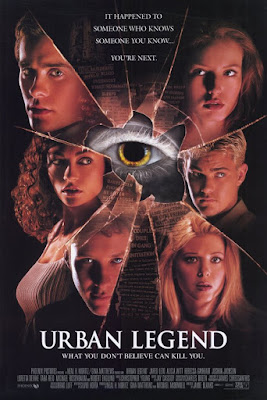 When Scream kicked off the slasher revival of the 90s/early 00s, it did it in a way that was both intriguingly left field and completely misinterpreted by production companies looking to capitalize on its success. While this era is hardly the pit of despair that so many horror fans claim it to be, many of those ‘nu-slashers’ are certainly mediocre to terrible at best and for that reason I haven’t even bothered to revisit many of them since they came out. However, at the request of some of our readers, Urban Legend came to be on my review queue and eventually I warmed to the idea of taking on this modern slasher that spawned its own franchise...the sequels of which I have yet to revisit since they were released either.

When news of Michelle’s (Wagner) death reach back to her campus, things start to get a bit tense. Everyone seems to know who she is, but no one really seems to know her. Yet, her death has a strange similarity to an old urban legend. This leads Natalie (Witt) and the campus writer Paul (Leto) to dig a bit deeper into the entire thing. When more bodies start turning up based on urban legends though, they find that nothing is as it seems.

In a way, Urban Legend is much better than I remember it being from almost 20 years ago. It very much pulls heavily from the Scream handbook, but instead of the killer being influenced by horror movies it’s a hooded murderer that takes a page from urban legends in slaughtering these obviously too-old-to-be-real college kids. Like the film it attempts to replicate, it contains a sense of self awareness that helps the audience consume the film and its silly plot progressions and stereotypical characters. A stacked cast (featuring a young Jared Leto as a take no prisoners campus writer and Joshua Jackson as a frat boy) helps out to make some of the characters bearable and smaller glorified cameos by Robert Englund, Danielle Harris, and Brad Dourif make for some sneaky homages to slashers of the past. The film has a lot of fun with its idea and while it doesn’t quite go the distance with its kills by being held back into PG-13 territory (for the record, this film is R rated so figure that one out as I suppose it was a stylistic choice), it definitely has fun with the diversity of the stalker moments. Director Jamie Blanks also gives the film a bit of visual energy with his camera work, using sweeping movements and Sam Raimi inspired angle work to keep things from getting too by-the-numbers as it goes.

The problem then is that Urban Legend never goes far enough with anything it does. It’s self-aware, but not enough so to use its knowledge of slasher tropes to throw twists at the audience. It has a sly bit of dark humor underneath its formula, but never strong enough to truly be funny or shocking in how it approaches its characters or plot progressions. And the kills are silly, but not to the point of sheer slasher lunacy that made many of the 80s classics ones to remember just on how ridiculous those punctuated thrills were. Because of its attempts at replicating Scream and being a consumable horror film for teens in the late 90s, it plays things too safe and too dreary to be truly memorable. We don’t care enough about the paint-by-numbers characters to be invested and the film doesn’t try to use that to its advantage with its self-aware moments and darker humor to give us the truly entertaining fun that slashers can deliver. There is plenty of potential in Urban Legend, along with some fun style, but never the inspiration to go the distance.

Perhaps this is why Urban Legend has faded from mainstream memory as time has gone, but still retained enough devout cult fans that we have received a dozen or so requests to review the film. It has all the foundations of being a frantic and solid modern slasher, but never quite has the momentum and execution to get it to that next level. Urban Legend is better than I remember giving it credit for (perhaps because I’m not wading in a saturated slasher market anymore), but it’s still not a great film by any means. A revisit was nice. It’s not going to be making it into my classic rotation anytime soon though.