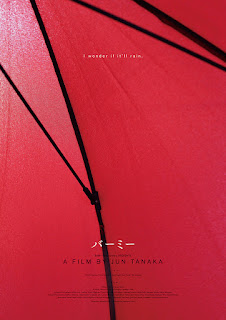 Ghost stories in Japanese cinema have sort of faded away for the most part, aside from trying to squeeze out every drop of profit that companies can from franchises like Ju-On or Ringu, but J-horror (as dubbed by Western culture) in general is a dying genreas a whole, or is it? No, all jokes aside, Jun Tanaka takes the romanticized stories of ghosts that the likes of Kiyoshi Kurosawa has done before during the boom of the genre, and resurrected it and made it all his own by way of indie film making, with the chilling and overall creepy, Bamy.

After leaving work one day, a woman named Fumiko runs into a man named Ryota, a former acquaintance from university. As if drawn in by destiny the two hit it off, fall for one another and before long, they are planning their own marriage; setting appointments and prepping arrangements for the big day. One thing that Ryo has been hiding from his lover though, is his unbelievable ability to see ghosts. He has lived with this curse for as long as he could remember, but he carries on with it, although these ghastly entities begin to interfere with his daily life, thus potentially soiling the relationship they have been building this whole time.

I don't want to give away too much as usual, but I think the story presented here is interesting but at times a bit muddled and confusing. I understand that he sees apparitions, but the way that people react around him that clearly see that he is indeed seeing something that they clearly can't, at times made me laugh. If I saw someone acting the way he does at several points during the movie, I'm afraid I'd have to intervene or find the proper authorities who can and most certainly should, but I digress. The ghosts in this film are absolutely creepy and had me in flashback syndrome to the fear I felt discovering Japanese horror cinema for this first time back in the early to mid-2000's. They are more shadowed out and slightly out of focus, some more so in silhouette than others, but until the final act of the film, they had me terrified. I say up until then, merely because the film shifts focus and becomes less about chills and tries to be more philosophical, which to an extent works, but sort of falls short.

On a technical level, the minimalist look and feel to the movie adds even more layers to the cold world presented before us, from the empty apartment our lead resides in with his bride to be, filled with damp whites and almost no decor, to the seemingly empty streets, void of existence, save for the occasional pedestrian or car passing by, the world just felt bare, and it really works. We almost see more ghosts than people, save a few key venues such as Ryo's workplace or the restaurant the couple visit later on. The score on the other hand is what irritated me most. At times it is beautiful, eerie and heightens the mood to an almost unbearable sense of dread, and at other times it is so jarring and obstreperous that it completely sucks you out of the experience entirely, which is unfortunate as this intentional design of loud scores cutting to dead silence works, but in most cases it is tripping over its own ambitiousness here, although I do give it props for creativity.


The other big thing for me that keeps this from truly being a fantastic piece would be in the development or rather lack there of between our leading couple. Their relationship felt forced and the natural connection and chemistry that the two should have for one another just wasn't there. Some of the drama injected throughout seems out of place and theatrical at times. There is a scene towards the end in a bar / restaurant location with Ryo and another, and without spoiling, I finally felt something for the character but alas I think it was too late. The chills are more effective than the connection and feelings attempting to be drawn out of us towards these characters. It has an almost nihilistic vibe at times, but I don't think it goes far enough in either direction. That isn't to entirely discredit the film, or story for that matter. As I said the concept is great, and the ghosts are interesting mixed with Ryo's journey he embarks on with his curse and where it leads him are all very entertaining to say the least.

I do love the idea of this red string of fate that binds two lovers together for eternity, no matter what may or may not happen between the two. This ancient Japanese, or rather East Asian in general, myth that is presented here is quite interesting and something that I was admittedly unfamiliar with. Unfortunately the concept is not always entirely realized, but the director took an idea I had not seen before and went with it, and despite its shortcomings, I believe overall that Bamy truly puts a strong place alongside other great horror films from the region, though I wouldn't exactly say it's so easily categorized as such. It isn't strictly one thing or another, but an amalgamation of several ideas and genres, some more effective then others, and with that said, this one gets a strong recommendation. There is a lot to love here and fans of films of this nature will not be disappointed.


More on this concept, as presented by director Jun Tanaka himself, from his own site:

The red thread of fate - an East Asian myth of a thread that ties destined lovers together - is nothing but a curse. We cannot will miracles to happen; they are forced upon us, abruptly and violently, by an unfathomably great power. One cannot escape it, one cannot resist it. The mythical thread then, if it exists, is surely something monstrous. Faced with such a force, man is always small and powerless. This miracle picks its targets arbitrarily, toys with them, and will not relent until its thread has drawn the fated pair together.     - Jun Tanaka