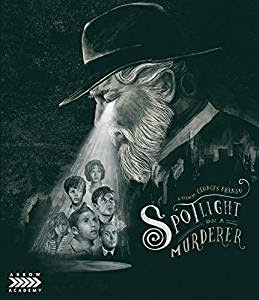 One of the beautiful aspects of writing about cult film is that, with an open mind, there is a lot of surprises out there in the historical landscape of the art and so much of it is overlooked. Spotlight for a Murderer is one of those films that creates a special moment of discovery for me. Arrow Academy is a label fairly new to me as Blood Brothers has mostly dedicated its time to genre films more often than arthouse cinema, but Spotlight for a Murderer is one that appeals to both the genre side and the arthouse side. A 1961 French murder mystery flick, this gem is at times a noir, a gothic horror flick, an Agatha Christie inspired thriller, and a satire on all those things. It adheres to the tropes, but does so in a manner that indicates it knows it is accomplishing just that and starts to toy with its audience in the meantime. The film is highly engaging and is practically self-aware which makes it the perfect kind of cult film, in the know but well executed enough to exist on multiple levels. Needless to say, for those who enjoy any of the above listed genres or styles, Spotlight on a Murderer is a film primed for your collection.

Count Herve de Kerloquen (Brasseur) is terminally ill, but when he vanishes in his immense castle the heirs to his fortune are a tad desperate to find him. If no body is found, then they must wait five years to take their inherentence and many of them are in need of the money sooner rather than later. Staying in the castle, they decide to use it to try and generate funds by doing a theatrical showing of sorts about a legend in its history, but as the various heirs start to die in random accidents a question arises on whether the Count is dead at all or if one of their party is just looking to boost their monetary value.

Spotlight on a Murderer tends to be overlooked in the grand spectrum of things simply because director Franju released the iconic Eyes Without a Face prior to this. Thus, it can be seen as a letdown in comparison and I’m sure at the time it was released it was viewed as such and is one of the reasons why it has succumbed to a somewhat obscure destiny. Fortunately, Arrow Academy loves to dig up these gems and breathe some new life into them and that’s just what this new restored Blu Ray of Spotlight on a Murderer does. Quite frankly, it deserves a lot more attention than it has received. The film is not only a strong example of the director’s ability to blend gothic tones with classic murder mystery plot structures, but it uses the tropes of both to its advantage. It presents all of the characters are morally gray and uses that to develop a situation in the film that almost comments on itself and the genre in how theatrics are used to tell stories. It’s a subtle meta concept, particularly when it comes to the actual performance of the story that the film uses, that works in impressive manners.

Of course, it also helps that the film even when it is making a commentary on its own genres and style, that it’s well executed. The characters, even when a tad two-dimensional like many of the cousins in the house that don’t get enough screen time, are performed with a sense of purpose to the whole and certainly charming in many ways while director Franju partners it with a sense of tension that makes it as riveting to see play out as it is fun to see what spins it may give the genre. There are plenty of red herrings and clever twists as things play out to make it fun which gives it an admirable consumable nature to go with its sly commentary. He uses the castle setting to maximum effect and builds on the entire experience from there with intriguing characters and fantastic pacing.

As always Arrow Academy comes through with the release in quality with a restoration by Gaumont, newly translated subtitles, and a nice little classic featurette on the film with interviews of the cast and crew that will be fun for fans. There isn’t a lot of features on the disc, not to the amount that Arrow Academy is known for anyway, but the booklet that comes with the film features quite a few writings and articles that cinephiles will enjoy.

Even with few expectations going into the film, Spotlight on a Murderer came out and showcased one of those great unexpected films that’s smarter and stronger than what was on paper. It uses its artistic subtext and strong execution to make what would seemingly be just another murder mystery flick into something much more entertaining and thoughtful. For those willing to give it a shot, it comes with a very high recommendation and for cinephiles this is definitely going to be cult favorite. 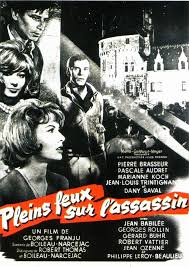 FIRST PRESSING ONLY: Booklet featuring new writing on the film by Chris Fujiwara

Written By Matt Reifschneider
Posted by DarkReif at 12:43 PM