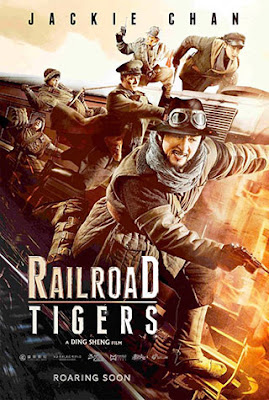 Ding Sheng and Jackie Chan have already produced two solid films, the very impressive and effectively dramatic Little Big Soldier and the darker, underrated Police Story: Lockdown, prior to Railroad Tigers. The duo, while they certainly have their detractors against the style and approach to both films, had shown that they could vibe and be successful as a box office draw with mainstream movie watchers. So with that in mind, Railroad Tigers came with some decently lofty expectations. The film delivers on many of its promises, including a massively charming and fun approach to the subject matter that carries the most of the film’s weight, but it’s also the weakest of the films that Ding Sheng and Jackie Chan have made together. Fans of Chan’s slapstick silliness will appreciate a lot of the gimmicky comedic action situations that arise in the film and Ding Sheng certainly has a knack for visual flair that makes the finale a hilarious and heartfelt spectacle, but the film is undercut by many problematic writing issues and narrative flow hiccups that it can’t overcome. Railroad Tigers is undeniably charming. It’s also flawed in how it goes about it.

Ma Yuan (Jackie Chan) leads a small group of rebellious thieves who call themselves the Tigers and mark their hits with a cute drawing of a tiger with wings. They are just trying to get by in their small town as a major stop for goods on the railroad system, but the Japanese occupation of the area has left them with little left to lose. When a wounded soldier tells them about his plan to blow up a rail bridge to help resistance against occupation, Ma Yuan and his railroad tigers may find the purpose they have been looking for…but it might also lead them to their demise.

While the period of Japanese occupied China is not a new setting as a staple for the cinematic industry, Railroad Tigers has a great little story behind it with a strong angle that makes it more than entertaining for those who have seen a ton of “resistance fighters have to band together to fight off the Japanese” flicks. The angle? It has a lot of damn trains. It’s a simple approach, occasionally shifting its settings to the station and village where the Tigers operate out of or a supply depot for a small heist portion of the film, but it’s an effective one. This kind of angle allows the film to play out some fun sequences that bode well with the Jackie Chan approach to entertainment – mainly what kind of crazy stunts and jokes can one make involving trains. Ding Sheng runs with it. The opening involves a train heist, their repeatedly blow things up in humorous ways, the Tigers sneak aboard trains in continually ridiculous ways, and the finale features one of the coolest train wrecks in recent memory. Chan and his team fit perfectly into this approach also as they deliver heartfelt and personal performances that balance the dramatic tension of a historical setting with the gimmicks of the stunts. They give Ding Sheng a lot of great chemistry to utilize to pull in an audience and deliver on the action when needed.

However, despite these fun action set pieces and wonderfully charming performances, Railroad Tigers suffers from a stuttering narrative flow and writing that feels less involved with building up a cohesive set of scenes and more concerned with delivering the emotional resonance needed for it all to work. There is far too many secondary plot lines concerning the various smaller members of the Tigers or some of the characters that the major players interact with and much of it feels unnecessary padding to give the film a more epic feel. Instead of focusing on Chan’s character’s relationship with his daughter and potential future wife (both of which are fantastic core ideas for the film to hinge on, but rarely feel that way) it just randomly adds more characters as it goes. There are two villains in the film when there really only needed to be one and there are a slew of characters irrelevant to the plotting or narrative that pop up to throw in complexities and layers that detract from the main heart of the film. It doesn’t help that Ding Sheng seems unsure of how to handle the larger levels and narrative structure of the film as it just keeps adding in more and tries to overcome its bumpy delivery with half-assed transitions that try to be charismatic and artsy when it’s obvious they make no sense.

Railroad Tigers remains a fun movie that is hardly as effective or impressive as it might have been considering the talents involved. Its narrative is flawed as is the overly dense writing, which even features some silly bookends about a young kid visiting a railroad museum because I guess they couldn’t figure out how to start and end the film in a natural manner, that detracts far too much from the great chemistry, performances, and action that is contained in the film. Fans of modern Jackie Chan films can do much worse, truthfully, but go into Railroad Tigers with the proper expectations to enjoy it for what it does well. It’s charming, silly, and features just enough heart to sell itself, but it could have been one of his best with a few more drafts of writing.

Written By Matt Reifschneider
Posted by DarkReif at 5:54 PM