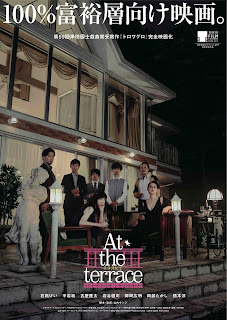 Folding out like a stage play, Kenji Yamauchi's At the Terrace takes place all on one location, the terrace, attached to a large mansion, where the owners are hosting a party. A woman walks out from behind the curtains on to this terrace, slowly followed by a young man from another side of the house. He seems infatuated by her, trying to garner her attention, without being too obvious. After letting out a pathetic sigh, another woman, the owner's wife, walks upon the terrace and starts to call out the man for his desires. This is just the scratched surface of the confrontational banter to come between our seven characters who come and go from this particular place.

Firstly, the film is absolutely hilarious. The dialogue is on par with the likes of South Korea's conversation driven auteur, Hong Sang-soo, and that is a huge compliment from me, as Hong is easily one of my favorite filmmakers out there. That is not to say this mimics or even tries to be a HSS film, but reflects the man as such in dialogue alone. The characters reminded me of his works as well to an extent, but they are very much their own types, and in a lot of ways, much more developed than those of his movies. You go from liking the characters to despising them and back to liking them once more, constantly. I love the constant shift of who you will side with and who you like and dislike all together. Everyone here are as enjoyable of characters as they are despicable, and that is a true feat to Yamauchi's phenomenal writing.

Stylistically, the film is gorgeous. The lighting from within the house and various porch light fixtures illuminate the terrace quite nicely, and give a lush, naturalistic visual to accompany the performers. The angles switch between some amazing close-ups and slow drifting shots that focus on a multitude of ongoing conversations amongst multiple groups of people at once. For example you see three of the men standing to the left of frame, off in the distance (in a sense), and they are chatting back and forth, and in the foreground the leading lady is out of focus, and slowly the male owner of the house walks over to her and sits on a couch beside her, before snapping into focus, and the two begin talking with one another. Both dialogues continue between the two groups, but the camera gracefully captures it all, while shifting your attention between both parties. It's quite interesting and handled with sharp precision. These small, but very calculated decisions throughout are yet another praise to the director's skills.

In terms of a plot, it is essentially nonexistent, but it is perfect for a film like this. Again, it's all about human interaction here, and that is the entirety of this film. Alcohol and lusty desires make up a majority of the basis for which these conversations and arguments stem from. Who is with who, and why they are, or aren't, all become more apparent as the film goes on, and it throws some hilarious twists all the way up to the finish. From multiple characters having the same first name, to the man who works for "That Toyota?", and a compliment on our leading lady's arms that sparks the core rage of our opposite leading female, these topics at hand lend themselves to concieve some truly hilarious dialogues.

Going deep on the characters and what makes them tick and how they function would be to spoil the film, so I don't believe there is much more that I could possibly delve into, without this turning into a possible discussion piece / analysis. That said, At the Terrace is not only one of Japan's very best films of 2016, but one of the best from anywhere that year. It's the best way I've ever witnessed a stage play be reflected on film, and it does it ingeniously so. If all plays that were being adapted to film, or written for film with this theater driven mindset, were to take notes for how to proceed in the future, then this is the way to do it. I really can't see many people not liking this film whatsoever. It's as much an arthouse piece as it is highly entertaining, and with that, I think this is truly a special piece of work, and have my fingers crossed that some brave indie label is willing to take on this film outside of Japan at some point. It really deserves an even bigger audience across the world.