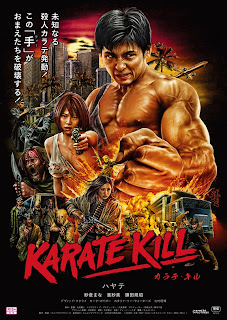 Kenji (Hayate Matsuzaki), a highly trained Japanese martial artist, embarks on a journey to Los Angeles, where it is known that his sister has disappeared off to. It's a simple plot, with an even more simple story, but that is quite alright as Karate Kill is far less concerned about its narrative telling and more interested in unique and completely bonkers characters that occupy a crazy and broken world crafted by the insane (wonderful) mind of Kurando Mitsutake, the same madman (sane gentleman) behind as equally bat-s**t crazy of works such as Gun Woman and Samurai Avenger: The Blind Wolf.

I will say right off the bat, that these are not typically my type of films. I have never been a fan of the many genres that works like this pull from, but that being said, occasionally I do find myself itching for a trashier piece of entertainment, and I hate to throw that word out as it is typically perceived with a negative connotation. In the case here and with plenty of other films of its nature, it isn't implied as garbage, but most certainly low-brow entertainment, and with Karate Kill it is fine dining mixed with a couple of bad bites that make for an overall enjoyable meal.

Kenji sets off on this bloody journey, ending up at a bar where he finds out his sister was working as a hostess, fists are thrown, and it doesn't end well for the men there. Aforementioned just above, he has headed from his home in Japan, to America, where he is met with crazy redneck racists that he has no choice but to pummel into near nonexistence. Rinse and repeat as our hero beats the snot out of every person in sight as he makes his trek to find his lost sibling. We find out that she and other women have been taken captive and are being brainwashed by a crazy cultist, who is quite frankly one of the most vile and disgusting but memorable villains I have seen in a movie in quite some time. The more interesting part about this group of crazed people is that they sport go-pro camera rigs on their head as they broadcast live to the internet these abductions and further heinous acts committed against these women. The things they do are uncomfortable to watch naturally, but we all know what waits around the corner for these lunatics! 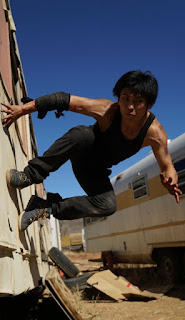 I really enjoyed Karate Kill, but I wouldn't say it goes off-the-rails enough to truly make it an instant classic. I think fans of Kurando will find lots to love here and even martial arts cinema enthusiasts ought to be well pleased by the presence and skills presented by Hayate, who I can most certainly see becoming the next big thing in action movies. The guy is a total badass and commands your attention in every scene. Not to mention, he is even pretty awesome at maneuvering himself about the various locations in a parkour fashion, and you can tell its him in every single shot. It's so nice to see a lead literally do every single one of his own stunts.

Every time there was a fight scene happening, I was genuinely thrilled and couldn't wait for the next one. Perhaps the highlight of the film for me is during the fight between Kenji and a sword-wielding man inside the trailer of a moving semi that is going full-speed down the middle of a road. The choreography here and the unique moves incorporated make for the most memorable throwdown of entire show. If I had one complaint in the action department, it would be that some of the blood effects are done via some not so well to look at computer generated squibs. It is only more obvious here when coupled with the absolutely wonderful practical effects throughout (the ripping off of an ear comes to mind).

That being said, I think the film fluctuates in terms of quality on a technical level. Some shots are absolutely gorgeous to look at, such a training montage featuring Hayate and Asami, who here plays another gun-wielding femme fatale, and many others come to mind as well, like the unique way of presenting the go-pro footage on screen, or the rotating camera that holds on one entire, unbroken take of our lead throwing down  with numerous goons early on in the story. All quite impressive, but then you mix that with some poorly lit, aftereffects driven scenes, such as the laughably bad and very forced intimate scene between our hero and his partner in crime. He is later shown training moments afterward, and we are blinded by and ultimately taken out of the experience by some very shoddy and unnecessary effects once again. It's very frustrating, as like I said before, some of the movie is absolutely wonderful to look at, and at other times it is rushed and very jarring to the senses, and not in a good way whatsoever.

Clearly a lot of work and even more heart went into the making of this film, and when all is said and done, I thoroughly enjoyed the insane and violent world of Karate Kill. It most certainly has me itching to see what Kurando conjures up next and even more excited to see where Hayate may end up as an onscreen fighter. The guy is the real deal and I think he could be the next Scott Adkins if given the opportunity. This film is for a certain breed of cinema lover, and you all know who you are. For others, this film will not work whatsoever and sadly some may end up offended by its gratuitous nature, but for those with an open mind and a sense of fun carried on by the grindhouse works of yesteryear, this may be your go to film for the year. I was a little more down the middle with it, but ultimately it is memorable and offers up a lot of sleazy, ass-kicking fun!