The Bird with the Crystal Plumage (1970) 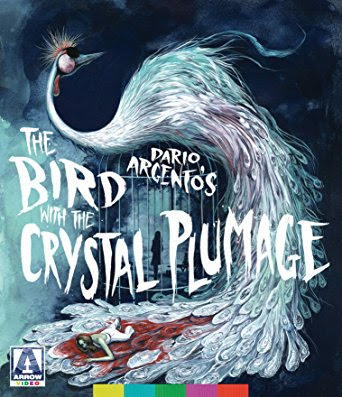 At this point it has been over 40 years since Dario Argento’s debut film, The Bird with the Crystal Plumage was released. The film is iconic. It establishes a lot of the themes and style that Argento would utilize throughout the first portion of his career, it kickstarted Italy’s obsession with the niche elements of the giallo film in the 70s, and it continues to showcase just how effectively it was made to this day through the massive fanbase it has accrued. For the most part, everything has been said that needs to be said about the film in the cult cinema community and there are plenty of folks out there that have spent a brilliant amount of time embracing and celebrating this film. Like the folks over at Arrow Video. Not only is this film still iconic, but it has never looked better or received a more heroic package than the latest Blu Ray and DVD combo pack released by Arrow Video. If you want to save some time reading the rest of this review, then I will just say this: buy The Bird with the Crystal Plumage now and buy this version of it. If you are curious to why I say that then please, read on.

Sam (Mustante) has been in Italy for two odd years now and is finally ready to return home to the US with his partner Julia (Kendall). However, after receiving his latest check to solidify their trip he stumbles on a gruesome scene. In the middle of an art gallery, a woman and a man clad in black wrestle over a knife. When Sam goes to interfere, the man runs leaving the woman bleeding on the floor. This is just the beginning of Sam’s decent into the macabre as the events open a door into a realm of murders, masked mayhem, and a maze of red herrings to sift through.

It’s the confidence that The Bird with the Crystal Plumage presents itself that lifts it well above and beyond many of its peers in the genre. Essentially, the many pieces of the film that are stitched together are not unique on their own as Argento pulls heavily from many of the Italian murder mystery films of years prior (particularly from a handful of Mario Bava films) for parts of Crystal Plumage. The manner that he pulls them together is something extraordinary to behold though and is the main reason this film became a large success when it was released and remains one of the classics today.

The execution of the film comes completed in two forms which Argento balances together in a story. The first is that Crystal Plumage blends subtle clues of detail orientation in its approach to narrative and plot progression. It’s balanced in fully impressive ways. The manner that the story builds cluing in its audience with small details to lead them one way or another while throwing enough false flags to keep them guessing (without being super gimmicky) makes for a great foundation to keep the movie intriguing as it spins left and right. Perception is key to how it unfolds and it always keeps its audience double guessing about what they saw or heard. In this manner, it hides some of the most obvious aspects of its development in broad view while keeping its momentum throughout the process. The audience truly rests inside of our amateur detective’s shoes as he desperately plays against the clock to put the pieces together and it makes for a wild ride in its subtle and clever writing that’s executed with finesse and spot on performances to make it fluid.


The second part of the execution (and one that is perhaps the most obvious for fans or those only remotely familiar with Argento as a director) is the style that it uses for the actual horror sequences. While Crystal Plumage may not go as far as the director would later in his career in crafting surrealistic imagery or tonality for shock and artistry, the basis for his work is all here and it balances the momentum and subtle detail work of the script in brilliant ways. The use of POV shots, intense attention to small details like how the killer wears the black leather gloves, or the stark use of color and lighting all give the film a kind of fantastical spin that partners with the unveiling of various twists and plot progressions in striking ways. At times the film is downright cruel in how it portrays these things without showing a lot of gore or on-screen violence as the atmosphere and dread does all of the heavy lifting. Placing our protagonist between glass doors in the initial attack sequence, the use of timing in the killers intense digging through a door with a knife to get to a trapped victim, or a strangely mysterious chase sequence in the finale make Crystal Plumage an intense viewing experience that punctuates the previous part of execution in a manner that’s memorable and impactful.

To just add icing on the cake, this latest Arrow Video release of the film is as striking and impressive as the film it contains. The beautiful new artwork, the notable booklet that features writing and analysis of the film, and a slew of extras on the disc itself make this an Argento connoisseur’s dream come true. For those looking to get into the film or director, there is no better place to start that this pristine release that ought to be winning some awards for best home video release of the year down the road. The new 4K restoration of the film is immaculate. It does the visuals and audio proper justice as the true core of what makes this release so lovely. Not only is the film praise worthy, but the release matches it all the way to the top.

If you couldn’t tell from the rest of my review, I cannot recommend The Bird with the Crystal Plumage enough. It’s truly one of the Italian classics from a director confident and thoughtful in his execution of an outstanding script. The execution and confidence are what lift the film above the usual stock giallo elements and the manner that the story is told leaves the audience wondering if they truly were able to piece it all together even after the reveal happens. See the film and, if given the chance, see it on this latest release as it showcases the film in a way that reveals even more of its intricate details and iconic style while stacking it with brilliant special features. This might have all been said before for a film as classic as this one, but I can only hit home the importance of a film like this in this review. 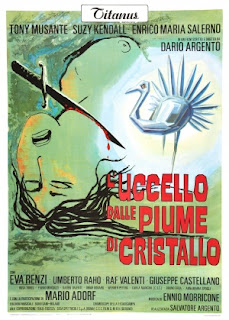 Written By Matt Reifschneider
Posted by DarkReif at 8:57 AM