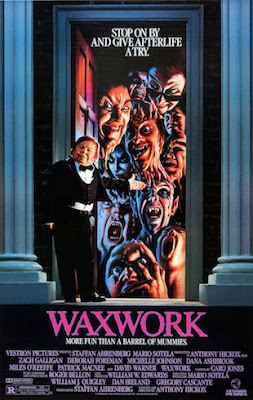 A film like Waxwork can only have come from an era as overzealous as the 80s horror film scene. Seriously. While the approach to its style and tone may not be for everyone, it does make for a film that’s relentlessly quirky and, for all intents and purposes, loud. In this manner, the film is exponentially fun. There is no subtlety to this film whatsoever as it goes about telling its tale of a haunted wax work museum and the youths that are being tormented by it. The structure of the film allows it to do plenty of fun “side stories” as the various protagonists are zapped into the scenes and have to fight off a variety of monsters or villains and it gives director Hickox a chance to show off some great practical effects and the strange sense of over the top humor he likes to inject into his films. In this regard, Waxwork is a full blown hilarious and entertaining time at the movies.

Granted, that kind of focus and stylistic approach does come with a few hiccups. Namely, all of the characters are broader gestures of what real people might be and the plotting can be predictable at times. It counters this hindrance by making all of the characters fun and outrageous in their traits. Even the smaller characters, no matter when they show up or their relevancy to the plot like the history teacher or the henchmen to David Warner’s Willy Wonka from hell version of the waxwork owner, are all in this same regard. It’s a flaw, but Waxwork makes it feel like it’s all part of the show and that’s a huge win for it. Sure, the film may have its tongue so firmly planted in cheek that it will rub some horror fans the wrong way, but when it comes down to it – Waxwork is a blast and comes highly recommended. 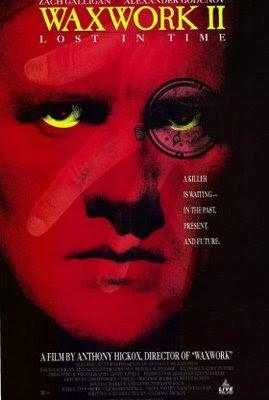 Having never seen Waxwork II prior to watching it on the new Vestron Blu Ray double feature with the original, I was expecting more of the same honestly. While the main structure and concept of having our two heroes fall into various themed ‘horror situations’ remains, Waxwork II takes the style and goes in a very different direction with it. It starts off right after the events of the first Waxwork, although the recasting of Sarah is certainly a bit jarring at first, and from there it immediately strives for the balance of horror and humor that made for the first one so successful. However, this film has nothing to do with a Waxwork and instead focuses on crafting a much more fantastical, adventure like tone after the initial reintroduction of our characters. In smaller portions the film works, particularly once they introduce the time leaping narrative where our couple gets sucked into various film influenced situations and has to survive. Many of the segments are a blast to watch, in particular a black and white haunted house portion featuring Bruce Campbell in a hilarious role and those make Waxwork II worth the time to watch. The finale, a sword fight that rapidly runs through a lot of various sets and styles, is definitely a highlight of Anthony Hickox as a director and his strange style of humor, horror, and action.

Still, it’s hard to say that Waxwork II is as good as the first. The last act gets a little too uneven as it introduces a variety of very silly twists for a medieval segment that’s easily the least interesting of the whole set even if the final fight is glorious. It also doesn’t do a lot to really build any kind of cohesive character building arc for either of the two leads that goes beyond just setting up the film and pushing it from there. While it remains fun and super entertaining, it’s even a bit hollower than the original. Still, fans of the style of the director or super silly horror comedies will still want to check out what it has to offer and since it comes in a double pack with the original it’s worth the price.