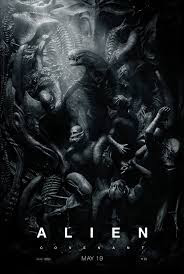 Prometheus was a film that almost immediately divided its fanbase. There are those that love it, those that hate it, and those that didn’t see it. Despite its occasionally glaring flaws, I sincerely love that film. I like that Ridley Scott tried to take the Alien franchise in a new direction, piled on a strange artistic and often bleak intent, and made an ambitious film that struck a chord (for better or worse) with everyone who saw it. Perhaps it’s these reactions to Prometheus that made its sequel – and still Alien prequel – feel a tad generic. On one hand, Scott and team seem intent on continuing with some of the themes of Prometheus with its very bleak tone and injected philosophical undertones. On the other hand, Alien: Covenant seems desperate to try and appease the Alien fans that bitched about Prometheus being too ‘different’ and goes back to some key formulas to appease them. Both are legitimate approaches to the film and, truthfully, Scott’s intent is admirable on some levels, but it still seems like the film is stuck trying to be two different films and the results are a tad awkward at times. Covenant is certainly a solid science fiction horror flick that entertains well enough with some scares and concepts, but when it comes to Ridley Scott I tend to come in with high expectations and this film just doesn’t reach those.

The crew of the Covenant are still in stasis when a randomized burst hits their ship, causing massive damage and killing one of their crew and a dozen or so of the colonists on board. Their trip is to colonize a planet still years away, but with their captain dead and repairs underway they already have their own hesitations. When they receive a weak signal from a human on a desolate planet close to them though, they decide to investigate…only to find that not all habitable planets are habitable.

For starters, one must admire that Alien: Covenant is a hybrid film. If you take the first Alien and smoosh it together with Prometheus, then you essentially know what the approach is to this film. I’m not sure one can get a better and more apt description of what the makers of this film were attempting to do than that. And for this review, it’s probably best to look at each piece – the Prometheus sequel side and the Alien prequel side - before looking at them together. Fortunately, there are benefits to both approaches and obvious detriments when trying to smash them into one cohesive film.

Firstly, as an intended sequel to Prometheus, Covenant takes its thematic pieces and goes even darker with them. This is kicked off by the opening sequence which features both David, played once again with screen stealing subtle intensity by Michael Fassbender, and Guy Pearce as Weyland. This immediately sets up a series of artistic themes and approaches for the film that pull directly from the direction that Scott was using in the previous film and lays a groundwork for the often bleak and oddly philosophical approach. This is threaded throughout the film from the questions about morality, creation, and destruction as a crew is dedicated to getting colonists to a new world that runs parallel with the advancement of the “weaponry” that eventually ends up creating the Xenomorph we’ve come to know from other entries into this franchise. Too often though, these themes and questions that are brought up in Covenant are done so in silly manners with an almost heavy-handed intent. Fassbender is able to sell a lot of moments, a few twists are remarkably predictable and if it wasn’t for him then they would have been completely flat, but it’s not quite enough. Unlike Prometheus that found a balance of subtle and extreme, Covenant has no such finesse and feels a bit scattered in trying to get it to mesh into the obvious horror/science fiction plot that is playing out. It’s not necessarily a help that the film seems awkwardly structured and edited in an attempt to be consumable and lofty in its writing and/or execution. Ultimately the larger questions of its subtext and message are usually cannibalized for the sake of delivering an Alien film that the audience so desperately wanted.

Which brings up the second portion, the obvious merging of that approach into being a full-fledged Alien prequel.  After the opening sequence featuring both David and Weyland discussing creation and Wagner, the film quickly finds a groove in the usual science fiction formula. We are introduced to a small crew of lovable and flawed personalities while they discuss the issues of trying to investigate a rogue signal before heading a strange planet. This is Alien 101. Whether it’s the misfit truckers of Alien, the rag-tag marines of Aliens, the prisoners of Alien 3, or the space pirates of Alien: Resurrection, this is the process that they go through. The difference? These characters, for the most part, are not nearly as endearing. There are a few highlights (who knew that Danny McBride would steal the show in an Alien film?), but most of them are simply walking personality flaws waiting for their eventual doom. This is only the start. As the film progresses, it hits all of the Alien formula tropes with varying degree of success. The back burster scene is intense and horrific, but the entire tension of the Xenomorph in the halls of the ship of the final act is tired and uninteresting, lacking the tension truly needed to sell such a tacked on finale. While one can appreciate the intent of seeing another Alien film in theaters and this one holds true to many of the aspects that made those films successful, it’s hard not to feel that many sequences are just lazy here in their adherence to said formula.

Speaking with a fellow film critic and friend, I think he stated it best in one of our conversations: Covenant could have either made a great Alien film with its story about Xenomorphs on a colonist vessel or it could have made a great Prometheus sequel about a rogue android playing God, but it couldn’t be both. Ridley Scott and company certainly try to do both, succeeding in smaller moments where the thrills, horror, or emotions strike home with vivid accuracy, but as a whole the film feels like a misguided Frankenstein’s monster of mish-mashed ideas tones and narrative jumbles. For every good moment, there’s one that’s just as inept. Fans will certainly enjoy it’s return to formulaic roots and darker more horrific tones, but Alien: Covenant is a misguided venture that leaves a cold and unforgiving aftertaste.