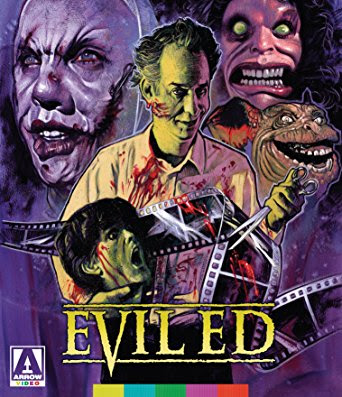 Horror comedies are a dime a dozen, although they certainly were not as prevalent as they are now it would seem, but even within that subgenre there are different approaches to the comedy and the horror elements contained within. One of the methods that varies the most in quality is the slapstick horror comedy, one of the more popular styles, and going into a film that takes this tactic can be a crapshoot. Even with a film that’s earned a significant cult following like Evil Ed there is an air of inconsistency that can be a huge detriment to the entire thing. While Evil Ed deserves the cult following it has accrued over the years, the film is not perfect. However, there is an impeccable kind of energy with a can-do attitude that partners with phenomenal special effects that makes this film the perfect kind of B-flick. Thus, also making it the perfect film for the Arrow Video audience.

Ed (Rudebeck) is one of those editors that understands the art of cinema. When he’s transferred out of the arthouse department and into the exploitation department to help out with editing the Loose Limbs franchise for the censors for its European releases, he’s not thrilled at the aspect. They even put him in a remote house by himself so that he can focus on his work. It’s not long before the films begin to affect his mind and he becomes obsessed with ‘cleaning up’ those who support such horrific films…all the while becoming the monster himself.

If it’s not apparent right away from the various movie posters hung in the background, the film’s title, and the blend of very silly slapstick humor and extremely violent gore, Evil Ed owes a lot to the likes of Sam Raimi and his Evil Dead films for the main portion of its influence. Throughout the film it homages a ton of classic horror movies of that ilk (like Re-Animator) and even others (a few homages to films like Halloween pop up too) and when one looks at Evil Ed as an homage to splatter films of decades past then it comes off as remarkably fun. Director Anders Jacobsson and his crew obviously had a focus on special effects and comedic beats with the film and the combination proves to be a riot for fans of the style. It’s relentlessly paced and while some of the sequences may not make a lot of sense, including a goblin like creature that he imagines to live in the refrigerator of the house, but it makes for a massively entertaining film nonetheless. It also helps that the cast is spot on with the timing of things with some of the jokes, even when they get into Troma territory of silliness or irrelevancy, and the special effects are astounding with monsters and gore delight.

However, with all its charm and eclectic energy, Evil Ed is hardly a perfect film. To keep its frantic pacing, the film must sacrifice things like effective development of plotting and characters, outside of the mental deterioration of our lead Ed, and most of secondary characters get little to properly develop themselves. Some of this occurs in the rather odd structure of the film which seems to come to its proper conclusion by the end of the second act as Ed’s family comes to find out where he has been (even then the family’s development is minimal at best and it’s explained why in the deleted scenes on this release) which makes the standoff between Ed and the SWAT team in the final act feel tacked on. The movement to having a different secondary character become the main protagonist at this point also seems a bit rushed which hinders the overall flow of the film and quality of the film. It loses some of the steam it garners with its anti-censorship humor in the first half and in a classical film critique it’s a patchy film at best.

Still, it’s hard not to love Evil Ed for its sheer insanity and heartfelt execution of its comedy and horror set pieces. Even with its significant flaws in writing and development of character and plot, Evil Ed has so much entertaining moments that I was having a blast watching it from beginning to end. It’s flawed, sure, but even those are part of its charm. As a bonus, this Arrow Video release of the film is insanely packed with special features including tons of great behind the scenes material and deleted scenes, multiple cuts of the film, and a 3 hour (!) documentary that explains some of the issues of the film. For fans, this is the defining release for a fantastically amusing film that’s a love letter to a genre that’s far more miss than hit. 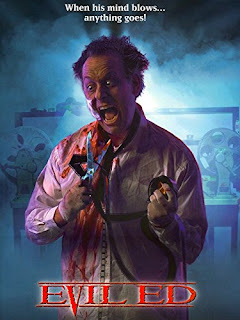 Written By Matt Reifschneider
Posted by DarkReif at 10:29 PM