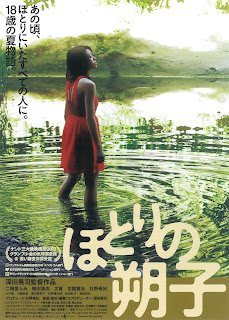 A young woman named Sakuko (Fumi Nikaido), whom is studying for entrance exams to university, finds herself off to stay two weeks at a relative's house to do so. While there, her Aunt Kie (Mayu Tsuruta) provides her support as she naturally should. During her time there, she meets an old friend of her aunt's named Usagikichi, played wonderfully by Kanji Furutachi, and his daughter Tatsuko (Kiki Sugino) and nephew Takashi (Taiga). As the days pass, quite literally, we see into their daily lives and begin to learn about their past, in a film that takes its time to deeply develop its characters, both main and supporting in this breezy and brilliant drama, that definitely never got the international attention it most certainly deserved. 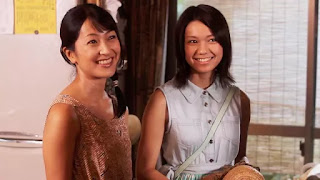 The feel of summer is so perfectly captured, from the hot feel of the sun beating down on everything, to the days of overcast and the humidity clinging in the air. That stale heat that lingers over everything and makes me crave a large glass of ice cold water. I can't really think of a film that nails that time of year quite as well as this, without the imagery over overemphasizing things. Subtlety is key here, for all elements of the film. The characters are very well developed, through conversation and even small things such as facial expression and reactions. We get a lot of information through dialogue without it turning into exposition and explaining everything in black and white. It's a lot of natural human interaction and I admire that. The story isn't something that is focused on, but it is to the work's advantage. Sakuko is our vessel and all things flow through her, but we never really learn a ton about her. She is the observer, like us as we slowly begin to learn more and more about the people she becomes surrounded by. Things unravel and become truly fascinating by the final act, but more on that later. 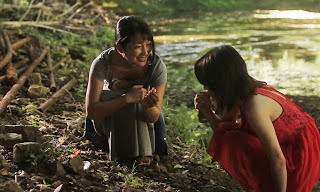 I've heard others complain of the film's seemingly forced element of incorporating the Fukushima nuclear incident, but I think it's implemented quite well and while seemingly preachy at times, it should be as the issue is very serious, but the movie is never derailed by this reoccurring topic and it really helps to shape the character of Takashi, who went on to be the most interesting character of all. I believe it touches on and addresses this topic without ever contradicting the flow or disrupting the arcs of development to the myriad of its characters. In fact, this entire part of the film is one of many standout elements to me, and in a positive manner as, again, my feelings for Takashi as a human being weren't from pity, but rather it gave him more depth and levity and showed a side of Japanese society since the incident that I would like to explore more of. There is a scene on the beach that comes to mind, but without spoiling, I think it is one of the strongest moments of the entire thing, and it is a truly powerful beat, albeit a small one.

It isn't the incident that is the core of the film, but rather humanity and how we interact with one another and the ideals of love and the complexity of relationships explored here. It struck a little too close to home at times with people I've known, just in some of its observations on the older couple's past relationship in particular. Without delving into personal bits, let's just say I think it nails the falling out of love that some people experience, and how just one thing, sometimes even out of our complete control, can fracture or completely shatter a foundation between two people. This spoils nothing, but I must praise its realism and truth that it bluntly displays, which leads me to another praise, being how many emotions this film brings you through without ever taking drastic changes to tone of ever doing abrupt genre shifts. I just enjoy that breezy and lovely feeling it gives off, while bringing splashes of weight and darkness to it. It's life, through and through. 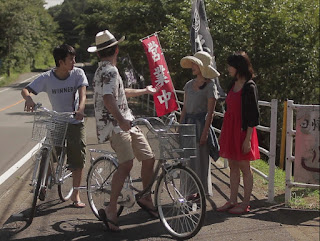 On a technical aspect, Fukada decides to frame the picture in a 1.33 : 1 aspect ratio, giving the whole vibe a much more intimate feel. I can't really say much more on it than that, to not overly dive in on trying to find meaning in everything. It just simply works here, and emphasizes the closeness of other characters, while they may or may not be close to one another or not, it really puts a magnifying glass on everything. I've already went on about the look of Au Revoir L’été, but the score is subtle and sparse but very effective when displayed. I really love the opening and closing tune. It compliments the colorful pallet scheme, but also channels some of the more melancholic elements throughout.

I absolutely adored this film, and I think while a slow journey, it is absolutely rewarding in its final act. It may get dark at times but it really just shows us for who we are as humans, equally beautiful and hideous. It's sad that films like this more often than not get overlooked on the international scene. This deserves to be seen by a large number of people, but like many others, seems to be seen almost exclusively in Japan, and that is a shame. Perhaps the number of people who enjoy quality works of this nature are diminishing, as pretentious as that may sound. Either way, this under seen piece of work gets my absolute highest recommendation. It's criminal this one wasn't / isn't talked about more. Do yourself a favor, and seek it out if possible.