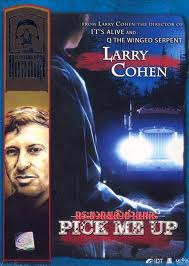 A group of people find themselves stranded on some desolate forest road when their long distance bus decides to take a dump on them in-between towns. Although the situation isn't as dire as some of them make it out to be initially, when a truck driver picks a few of them up a new terror is kick started on the roads. Unknown to the serial killer trucker, that also happens to be another hitchhiking serial killer coming through the same area.

Larry Cohen's episode of the fan favorite "Masters Of Horror" is an odd clip in the bunch. More or less a comedy of very dark proportions, "Pick Me Up" is a tale of very awkward moments, odd characters, and a plot that has to race by to fit it all in...in more than a few hilarious ways. The story is rip-roaringly funny in how clever it is and the use of awkward characters. Both of our serial killers are played to serious lines of crazy with weird personalities and quips that by the time they meet in the final act, we are anxious to see how this cab ride will turn out. To this, "Pick Me Up" works.

Otherwise, the episode is flawed from its lack of a true protagonist (or anyone to really root for period) and it has to fly through some of the secondary characters: read as waiting cadavers; to get them all to fit into the short. It's lack of heroes and lighting pace are made up for some by the random scenes and the eventual climax we begin to pine for about half way through.

Although the episode is rather random and not as solidly built as one would hope, it's quite funny and the story is far more clever than it should have ever been. This episode would have worked better as a full length film though as it needed that extra half hour to establish a lead and work out the pacing. As is, it's entertaining as hell though.