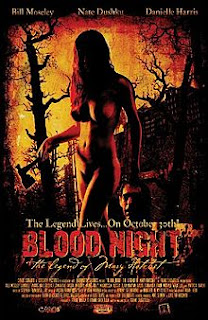 Blood night! Whoo! Generic holiday used to celebrate some sort of psychotic area history that includes stories of a killer ghost who haunts it on the holiday and occasionally kills people! Whoo! In all seriousness though, at least "Blood Night" was somewhat crafted from a 'real' legend in the area the film is based in. Unfortunately, that doesn't save the film from falling into mediocrity thanks to an oddly crafted script, poor acting, and a severely low budget. This film definitely has its own flair, especially when gandered at in a grindhouse sort of viewpoint, but it takes a lot of squinting to see it that way.

A group of local high school teens are out to celebrate Blood Night (a local holiday used to celebrate the life and death of Mary Hatchet, a mentally ill woman whose rampages of death are legendary themselves) and the return of an old friend (Harris) who has come to visit. They party through the night (lots of needless nudity and random sexual references included) and taunt the local ghost despite the warnings of Graveyard Gus (Moseley). Suddenly a bunch of them start turning up dead. Now its up to the survivors with the help of local legend authority Gus, to try to find a way to end Mary Hatchet's curse...or its decapitations for all of them!

I was tricked! Bill Moseley and Danielle Harris? Two horror legends in one movie!? Should have known better. Turns out both are more or less cameo roles and throw away performances. Damn. At least the rest of the film should be kick ass if they took roles, right?

Nope. Basic slasher film through and through. Although the film starts promising with its rather well directed and nightmarish re-telling of the Mary Hatchet tale and its rather horrifying performance from Facchi as Mary Hatchet, the film quickly delves down to retread water that a thousand other slasher films have gone over before. Group of horny teens out to party find themselves on the prey end of a murder spree. Nudity and carnage via some significant gore sequences are abound here and the story spirals down into a whodunnit mystery of relatively simple size. Yawn! Partner this with some low budget sets, low budget acting, and a group of characters no one actually gives two shits about who just make sex jokes the entire time and color me bored.

The one saving grace for this film is its director Frank Sabatella. Although the guy can't write to save his life, his knack for finding some very cool shots amid the script and horrible acting is rather uncanny. He makes that opening sequence work and is able to nab some tasty morsels of creativity as the movie drifts away into cliche sea. At times, I felt like perhaps he would be able to lift the film above its grindhouse style and into the next level (like Eli Roth did with "Cabin Fever" or Ti West did with "The House Of The Devil"), but it never happens to that extent. He does show some great promise as a low budget horror director and I would be looking forward to seeing more from him.

Other than a rather surprising directorial effort, "Blood Night" just saunters along content with being an average slasher film. Even the 'twist' ending was a 'been there, done that' moment. "Blood Night" was just relatively disappointing. With the hype of its 'hard to come by' status for years, I felt as though the movie garnered for more attention then it deserved. Unless you are just in the mood for gratuitous nudity and gore, this one might be a skipper.

Written By Matt Reifschneider
Posted by DarkReif at 8:45 AM