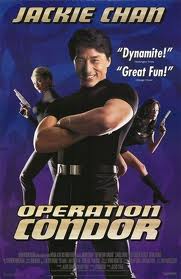 *Note: This review is for the American cut of the film.

When the US starting acquiring the rights to various awesome Chinese films, it should have been a great thing. Too bad they screwed up most of them. Take "Operation Condor" for example. It's a pretty solid Indiana Jones knock off film with great stunt work, but its awful dubbing and horrid title sequence certainly spell out that the US didn't know how this was supposed to work. It's still a fun film with lots of traditional Jackie Chan humor and stunning action sequences, but it still leaves a few...holes that might be filled with the original cut.

Jackie (Chan) is brought back from his treasure hunting exploits to help find a lost horde of Nazi gold in the African desert. He is teamed with a desert expert and the granddaughter of one of the Nazi's who hid the gold and the three must battle their way through deception, spies, and gravity to be the first ones there.

At its least, "Operation Condor" is a fun and fancy flick that really utilizes its sets and plot well. By plot, I mean the random 'adventure' style flimsy script that is thrown together to piece up some great action sequences. Are their character arcs? Hell no. I'm not even sure if there needs to be honestly. If Chan's character wasn't named Jackie, I'm not even sure I would remember who he was. We get a random concept that allows Chan to do what he does best...slapstick humor and jaw dropping action scenes. One doesn't really need more than that here, even if its an obvious knock off on Indiana Jones with its tribes, traps, and Nazis.

The acting is sub par, although Jackie Chan is his usual charming self only this time with a gum chewing kitsch, with dubbing that makes it far worse then it probably is. The directing (from Jackie) is his usual stuff, mostly beneficial to just getting the film to the next sequence in as little time as possible. It's nothing to scoff at, as it does its job, but its certainly not winning any awards either.

The number one (and mostly sole) reason to watch "Operation Condor" is for the action pieces. Man oh man, are they ridiculous and fun. Although some of them are so out there to be asinine (see the hamster ball escape down a cliff), most of them are so well put together and executed that it shames every other aspect of this film. The air tunnel fist fight stakes its claim as the highlight of the film, comically too, but everything from the chain swinging leaps to the motorcycle wheelies to the slapstick gun grabbing in the hotel in the desert is sure to earn some grins and applause from even the most critical of fans. This is surely some of his best stunt work on film.

All in all, "Operation Condor" is a good film, but far from great. It lacks a cohesive plot, relevant characters, or any kind of legitimate connection emotionally for its viewers. On the other hand, the stunts are so awesome that none of the above matters. If you are a fan of the Chan then this is a definite must see. If only they had the original version available in the US.

BONUS RANT: Why the fuck does the US poster look like a Bond film? The film is an obvious rip off of a different action franchise, yet the poster rips on a separate one. Seriously...what the hell?

Written By Matt Reifschneider
Posted by DarkReif at 11:21 PM