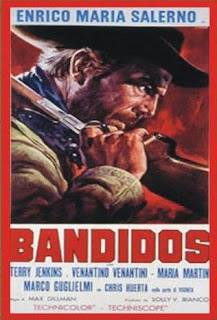 I love coming across wonderful obscure Spaghetti Westerns as good as "Bandidos". The problem why "Bandidos" isn't as well known in the realm of Spaghetti Western is due to its completely forgettable title and for the fact it lacks any bankable stars. Don't let that detour you as this is a Spaghetti that you won't want to miss.

Our film opens with an extremely violent train robbery where a sadistic gang brutally kill passengers aboard in order to obtain their valuables. The gang leader leaves one man alive, his old sharp shooting teacher, but cripples him by mangling his hands. No longer a master of his own trade, the sharpshooter travels the country with young men he trains in order to make cash as a circus act. After one day when his partner gets killed, a volunteer nicknamed "Ricky Shot" agrees to become his protégée, but Ricky is not all he seems as he is a wanted criminal that has a beef with his master's old pupil that mangled his hands. Is vengeance going to be on the menu? That would be a YES!

Though the cast doesn't contain any bankable actors, the entire cast does a wonderful job and the acting is actually above pare compared to other entries in the genre. Jenkins and Salerno have a nice chemistry in their teacher/protégé relationship and Venantini is a wonderful, nasty villain. This film definitely gets a thumbs up for its strong performances without big names.

Director Massimo Dallamano is no stranger to the genre as he was the lens man on Leone's first two westerns "Fistful of Dollars" and "For a Few Dollars More". He gives the film a likeable harsh and gritty tone that he is able to sustain throughout the entire running time. He also loads up the film with plenty of violent gun battles and some sly humor to counterbalance the extreme violence. Why he never directed another western is beyond me.

All this comes together to make a very satisfying Spaghetti Western that is definitely above average for the genre and deserves more respect than it gets. Sure it lacks known stars but the acting is top, the directing is visualistic (especially during the opening train robbery) and the film has a harsh gritty tone that is a must for great Spaghettis. It may not be well known but this is a definite film to hunt down for fans of the genre.