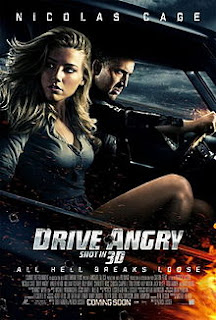 Modern grindhouse cinema is an odd duck. Sometimes you get fully retro flicks like "Hobo With A Shotgun" and sometimes you get truly modern films that utilize the style like "Shoot Em Up". Then again, you get films like "Drive Angry" that try desperately hard to not be fully grindhouse knowing full well they are. This leaves this particular film floating in a sea of mediocrity.

Milton (Cage) has a mission. He has to get his granddaughter from the hands of a satanic cult leader (Burke) hell bent on sacrificing the baby for the sake of bringing our friend Satan to Earth. Here's the problem: he's not sure how long he has or where the cult leader is because he had to break out of Hell just to do it. Now he's leaving a trail of dead in his wake with the help of the trashy Piper (Heard) to get to his granddaughter before Hell's Accountant (Fichtner) get's to him first.

Re-read that synopsis. Yep, that is most certainly the synopsis for a great grindhouse feature. Yet, throughout "Drive Angry", the general feel and atmosphere of the film battles itself, not sure whether to take the entire thing completely tongue-in-cheek or go the dark and serious route. As is, it really ends up as neither. The balance is earned here and there with certain scenes, but more or less misses the mark for the majority of the play time.

That being said, enjoy the film for its grindhouse roots. Don't think too much about it. Enjoy it for its angry and ridiculous plot for a man's vengeance. Director Lussier seems to understand how it should work most of the time and fills the film with lots of style and bulks it up on random grindhouse characteristics like outrageous car stunts (cars flip ridiculously for no reason) and loads of pointless nudity (including a gunfight/sex scene that rivals "Shoot Em Up" for oddities). It's the rather awkward serious scenes that ruin the mood with its less than extravagant dialogue.  Lussier wasn't all the problem here either. I was severely disappointed with Cage's performance as Milton and wanted him to go ape shit on the role like we all know he can. Luckily, his lackluster performance is made up for by the quirky and scene stealing weirdness of Fichtner as The Accountant. He seriously works that role for everything it is and it's the best part of "Drive Angry".

It's too bad that "Drive Angry" was as lackluster in its focus as it was. With its fun story and the talent included both in front and behind the camera, this film should have really blown the old socks off. Not surprising it bombed in the box office as a grindhouse film desperately reaching for that mass audience. Maybe they should have worked the promotion through indie theaters and built its reputation that way. As is though, it's still a disappointing film considering all of the potential it had to kick ass.