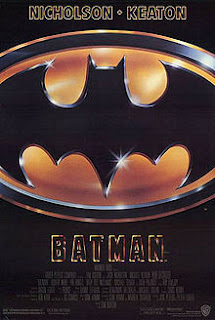 With everyone's attention focused solely on Nolan's third Batman film, "The Dark Knight Rises" due out in 2012, I felt it was high time we take a break from the ramblings of casting for this film and travel back to 1989 to take a gander at the big screen blockbuster  that was (and still is) the best Batman film, "Batman". So, caped crusaders of the night, throw on your cowls and capes and let's look at Tim Burton's late 80s version of Gotham and it's prince.

Batman (Keaton) has just started putting a dent into the crime lords of Gotham City as the vengeance who stalks the night. When a set up goes awry at a chemical factory, the diabolical crime goon Jack Napier (Nicholson) is dropped into a vat of toxic chemicals and left for dead. Not all are smiles and Cokes though when Batman learns that Napier has returned with smiles as a maniac known to be The Joker. With the nelp of a new friend and news reporter whom The Joker has come obsessed with, Vicki Vale (Basinger), Batman must find a way to stop the ingenious madman before he slaughters all of Gotham just for a laugh.

Although previously Batman was seen as a somewhat comical character with Pows and Bams (thanks mostly to the Adam West TV/movie version of the character), Tim Burton and company's view of the Dark Knight returns it to the roots of which it original was meant to be: a darker toned vigilante film that questioned the role of justice in society. With beautiful painted backdrops of a 30s meets 80s inspired Gotham City landscape and some great designs, this version of the superhero ably homages the classic comic whilst bringing it up to date.

The darker (yet some what still comic bookish tone) is handedly superbly by Burton. His style isn't quite as wicked crazy here and most of the more nightmarish things are given meaning by a well written script that really focuses on the characters within the action film. The film mostly uses Vale as a sort of 'audience' like connector to allow us to delve into this world and begin to fill in back story on both Batman and his nemesis The Joker. This is a rather brilliant approach as it allows Batman to remain this mysterious and detective like figure throughout the film as he really isn't the protagonist until the final portion of the film. Polished over with some great action sequences (the bell tower finale is awesome) and even better special effects (although some of the animated additions sure date the film), "Batman" works the great struggle of its characters smoothly into an entertaining and exciting film.

Of course, at this point one must also compliment the fantastic casting choices that were made for "Batman". Although many mocked Keaton's initial casting as Bruce Wayne/Batman, his glaring eyes and odd 'I'm hiding something' eclectic demeanor works in spades here and his comedic bits seem all in the past as he really tackles this performance. It must also be said that Nicholson as The Joker is pretty fucking brilliant too. He's creepy as hell here as his comedic side borderlines insane (did he really just say "Never rub another man's rhubarb"?!) as he does some weird things on screen with the character. Nicholson runs with the performance and makes it his own navigating between the genius of the character and the sheer insanity. If anyone says its overplayed, I'll rip their lungs out.

The fact of the matter is, "Batman" hits the combination of dark and family friendly action oriented film damn near perfectly. The film is fun and ambitious with its vision, yet serious enough to truly let the viewers glimpse the psychosis of this classic comic legend. Although its not perfect, the Vicki Vale character is a definite weak point, this is still (to the time of writing) the best Batman film. Hands down.

Written By Matt Reifschneider
Posted by DarkReif at 12:58 AM