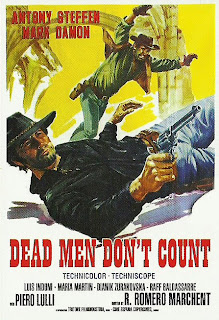 I almost passed up on purchasing this Spaghetti Western on DVD. The reason is that Wild East released the film in a double feature with "Kill and Pray" and I already owned the old single film release of that film. Well the diehard collector in my soul finally got me to put up my old release of "Kill and Pray" for sale on eBay and low and behold it sold for $25. That was more than enough to purchase the new Wild East disc and I can honestly say I am kicking myself for almost passing this Western on by as it is an entertaining and satisfying example of the genre.

What we got her is two bounty hunters who ride into the town of "Blackstone" after massacring an entire gang of wanted outlaws in order to collect the bounty on their heads. While in town they find themselves intertwined in a rash of killings linked to a corrupt sheriff in cahoots with the local wealthy land owner in order to obtain land in the area.

The main plot element that fuels our villains is a complete steal from Sergio Leone's epic "Once Upon a Time in the West" but that doesn't mean it still isn't enthralling. The plot still has plenty of twists to keep the viewer guessing. It ends up being much more than your typical revenge fueled spaghetti western.

The best part of this film is the cast which includes genre heavy weights Anthony Steffen and Mark Damon. What makes it great is that these two are known for playing completely the opposite characters: Anthony Steffen as the stoic, silent type and Damon as the eccentric cocky gunman. Due to this they counterbalance each other wonderfully and the chemistry between them is impeccable. Steffen especially shines as he adds atypically a little humor to his role without over-acting or going over-the-top.

Director Rafael Romero Marchent keeps the film moving at a brisk pace with plenty of action without sacrificing the coherent story arc. To top it off the film has surprising tight editing and beautiful cinematography that's brought to life by Wild East's wonderful widescreen transfer.

The wonderful character banter, strong cast, tight editing, action-packed gun-play, and coherent story makes this a dynamite time for Spaghetti Western fans. Don't pass this one up like I almost did! Sell your old copy of "Kill and Pray" if need be as this Spaghetti Western is worth every penny!

Written By Eric Reifschneider
Posted by Cronosmantas at 9:38 AM