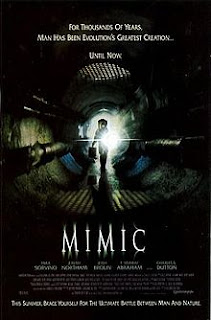 In the 90s, the slew of revived slashers that piped through Dimension films (and others) was almost sickening. In this onslaught of "Scream" inspired mediocrity, there were a few films lost in the flurry including the massively underrated "Mimic". With an up and coming Guillermo Del Toro at the helm and a well cast ensemble, "Mimic" makes a rather basic science fiction/horror script into something much more then it should be and creates one of the best forgotten surprises of the era.

When New York is plagued with a cockroach carried disease that is killing off mass amounts of children, a desperate attempt to annihilate the cockroach population results in the gene spliced insect hybrid called Judas. Although it works, after three years of disease free time, a husband (Northam) and wife (Sorvino) team who designed the insect find that the species has not died off as it should have, but has evolved into a much scarier predator.

A giant bug movie that wasn't made in the 50s/60s? You're kidding, right? Essentially, that's what is so clever about "Mimic" as it takes that old school science fiction/horror concept of a man fucked natural creature that runs amok and modernizes it. Not only does it update it for the 90s, but it updates it smartly (its not nuclear fallout to create the monster, but gene manipulation) and it effectively executes it for the screen. Making a believable, in the world of the film, and well built film.

Guillermo Del Toro truly takes this film to the next level. As a co-writer and director he really embraces the protagonists and story arc of the film to lift it above its rather cheesy concept. That way by about half way through the film, the atmosphere and dread of these hungry insects is so heavy that we can only root for the survival of our cast. With slick camera work and a great use of tension and story build, Del Toro makes "Mimic" the lost gem it is.

Not only does the director raise the film above its own standards, but a well casted ensemble is rightly made. Our two leads are righteously human in their struggles and tragic mistakes and with a hell of a supporting cast (Josh Brolin, F. Murray Abraham, and Charles S Dutton in throw away roles that are made more than just throw away roles? Hell yeah!) to compliment them, there is so much more added here then what was necessarily in the script.

When the 90s was regurgitating slashers like there was no tomorrow, "Mimic" is certainly a diamond in a pile of coal. It's scary, tense, and smart as it moves with urgency to update a long gone genre with force that needs to be seen to be believed. One of my personal underrated favorites.

BLOODY TRIVIA: Guillermo Del Toro was not happy with the version show in theaters and released on video. Supposedly a director's cut of the film (that Del Toro is happy with) exists somewhere out there. Curious to see what is added to make it so much better that the director would change his outlook. Perhaps one day it will see the light and end up in my collection.

Written By Matt Reifschneider
Posted by DarkReif at 12:03 PM