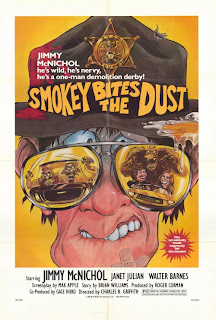 With "Smokey and the Bandit" and its sequel being huge hits in 1977 and 1980 respectively it comes as no surprise that rip-off king producer Roger Corman would jump on the comical 'good 'ol boy' chase film bandwagon (like you couldn't tell what film it ripped off from the title). This alone doesn't mean it's going to be unwatchable as Corman produced many loveable rip-offs in his heyday: "Piranha" was a loveable rip-off "Jaws" and "Big Bad Mama" was a loveable rip-off of "Bonnie and Clyde." Well "Smokey Bites the Dust" is from the director of the mega lame "Jaws" rip-off "Up From the Depths" and is a pieced together project stitched around stock footage of previous, much better Corman productions. In other words this royally sucks.

A high school jackass kidnaps the homecoming queen ('kidnaps' is not really the proper term as she really gets taken willingly) and he leads all the police in the county on a high speed chase. That's about it.

This pieced together monstrosity will give many viewers a sense of déjà vu as it takes stock chase footage from "Grand Theft Auto," "Moving Violation," "Eat My Dust!," and "Thunder and Lightening" and haphazardly throws them between newly shot footage of our annoying characters trying to give 'exposition'. So basically we get 80 minutes of mindless chase sequences intermitted with unwatchable plot sequences with horrid acting and feeble comedy.

As you can tell there is no plot, literally. It's just drive, drive drive. Even "Smokey and the Bandit" had somewhat of a plot and a goal of getting bootleged beer across state lines. Not here... just kidnap a girl and go.

The main high school character is a poor man's rip-off of the roles played by Ron Howard in his Corman productions and the comedy is just painful, with cartoon sound effects just making it bad enough to warrant the audience to vomit into their popcorn boxes.

"Smokey Bites the Dust" is bad, god-awful. It's so god damn bad that it even makes "Smokey and the Bandit Part 3" look like a respectable sequel. It's a cluster fucked mess that insults redneck audiences that even like the southern good 'ol boy chase flicks. Do yourself a favor and re-watch "Smokey and the Bandit" or one of the four films this poorly sewn together non-effort pulls it's stock footage from. At least with those films you're guaranteed a complete film with no stolen footage.

Written By Eric Reifschneider
Posted by Cronosmantas at 9:28 PM