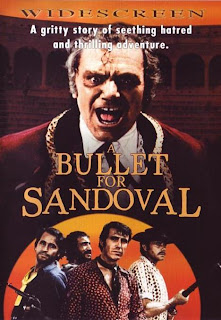 Well this was a pleasant surprise. Though I like main Italian star George Hilton I wasn't expecting much when going into "A Bullet for Sandoval". I guess I've just been soured due to viewing a handful of dreadful spaghetti westerns prior to this. Not only did "Sandoval" end up being a damn fine Spaghetti Western, but also one of the best I have ever seen, even biting at the heels of the classic Leone "Man With No Name" trilogy. Yes, "Sandoval" is that damn good.

Ever dependable George Hilton plays Warner, a brave soldier for the confederates that abandon's his post when he learns his old flame is giving birth to his child, a child he had no previous knowledge about. Going AWOL he arrives on her father's ranch to marry her but learns she has passed away during birth. Her father Sandoval, not too keen that this low life knocked-up his daughter, treats Warner like the shit on the heal of his boot and forces him off his property with his bastard son. While trying to raise the baby it comes down with a fever and dies so Warner snaps, gets a gang together and starts terrorizing the countryside before setting his sights on vengeance.

What I love about this film is it plays out like a complex Greek tragedy. I really felt pity for Warner as he truly wanted to be a good husband and father. Everything was against him from the Army, to his lover's father, to people who wouldn't help his dying child. He truly is a good man broke down and turned bad. A tragic figure that can't help but suck you in and George Hilton plays is perfectly. Classic American actor Ernest Borgnine is also a sublime ying to Hilton's yang as he is a truly detestable hothead fueling the fire with in Warner.

Spanish director Julio Buchs keeps the pace moving tightly and loads the film up with memorable visuals, especially the final shootout in a bull fighting arena that is eerily similar to the American western "The Wild Bunch". Oddly enough cult director Lucio Fulci is sourced as co-director on many releases of this film but from my research this is entirely false, with star George Hilton even stating this in interviews. Sorry Fulci fans... this isn't one of the late gore godfather's wonderful westerns.

"A Bullet for Sandoval" is a must see for fans of Spaghetti Westerns and is one of the best this hardcore fan has ever seen, and trust me, I've seen a lot (I own nearly a hundred on DVD). The Greek tragedy plot mixed with two great leads sucks the viewer in and the picture perfect ending will make sure this western will stay with you for a while.

The DVD release I have from VCI Entertainment in a double feature with "Any Gun Can Play" is odd. On a standard television "Any Gun Can Play" looks fine but "A Bullet for Sandoval" looks scrunched. Thankfully watching it on my widescreen TV in the living room I can get around this error by adjusting the picture mode. Just a word of warning to any potential buyers who only have a standard television.

Written By Eric Reifschneider
Posted by Cronosmantas at 8:17 PM