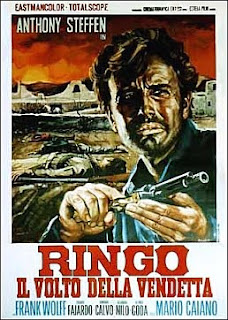 What we got here is two strapped for cash drifters that save the life of a Mexican. They discover the Mexican has a treasure map tattooed on his back so they blackmail him into splitting the treasure. An eves dropping smarmy ass wipe (played by Frank Wolff) has different plans and in turn blackmails his way into a four way split.

The plot is full of double and even triple crosses to keep audiences interested and surprisingly the film has good enough narrative to allow the audience to know what the hell is going on (a luxury that a lot of spaghetti westerns lack). Director Mario Caiano keeps his visual flair to a minimum but at the same time gives the film an interesting enough look to hold interest.

The cast is just wonderful with Anthony Steffen giving a little more emotion to his role rather than his usual stoic self. He is the 'Clint Eastwood ' of Italy so it did shock me a bit to see him even cry in one scene. Well he just moved up a notch in my book with this more human portrayal. Eduardo Fajardo gives a likable performance as the drunken elderly sidekick (whose quirky nature of having a pet rabbit on a string had me rolling on the ground) but the film is almost stolen by Frank Wolff as the smarmy crooked thief who corrupts everyone he comes in contact with. Alejandra Nilo also shows up towards the end to give the audience some much need eye candy.

Overall "Ringo, the Face of Revenge" is better than average spaghetti western aided by a wonderful cast but could have been made better with a hair more visual flair from the director's standpoint. Otherwise I had a wonderful time with the triple crossing plot. The film is not helped by its title which was named in order to capitalize on the success of the Ringo name, popularized by "A Pistol for Ringo."

Written By Eric Reifschneider
Posted by Cronosmantas at 5:02 PM