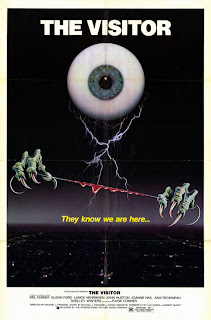 In the realm of Italian cinema it is easy to say that 99% of that country's output is style over substance. Some films even sacrifice coherence for style.... but in all honesty that's part of the charm. Dario Argento's films didn't always follow a completely coherent plot, then again that mixed with amazing visual flair gave audiences an interesting thrill ride. Even though they lacked coherence one could still follow a basic plotline. Some Italian films however sacrificed all coherence for style making a film that doesn't make one iota of sense. One of the most famous of these metagrobolizing films is producer Ovidio G. Assonitis overblown "The Visitor."

The plot is... lets say... confounded. In the opening narration in which Jesus Christ (Franco Nero, looking embarrassed to be sporting a yellow wig) tells a class of students the history of God versus Satan... whoops, they pronounce the dark one's name as Sateen in this. Sateen apparently crash lands on Earth in a space craft and after having a war with God with birds, he decides to knock up some human women who bare children to carry on his evil. Yes... all this bullshit is just in the opening. After that we get introduced to our main characters. Lance Henrickson plays a millionaire, hired by a devil cult, to knock up some broad who already has a child who calls the devil daddy. The cult wants her to have another child in order for her daughter to have a mate (incest... ewwww!). In comes archangel John Huston, who mostly just walks around with a smirk on his face as he tries to "help the confusion" of our mother-to-be and her devil child. Confused yet?

Instead of creating a somewhat coherent story, director Giulio Paradisi is too busy setting up odd camera angles, pseudo religious symbolism and bizarre special effects that just serve to confuse the audience instead of enthralling them. It took me two sittings through this film to truly grasp what the fuck was going on.

To aid in the confusion there is a shit ton of nonsensical bullcrap going on here. We get a boring, extended basketball game sequence that ends with the ball exploding while a player is in mid dunk. We get our devil child getting a loaded pistol for a birthday present, in which she drops and it conveniently shoots her mother in the back (really... where the fuck did that scene come from?). We also get an extended ice skating sequence where our devil girl dances with some young guys then decides to throw them through store front windows.... all never touched upon again. Our director also likes to make long drawn out stair climbs and descents to be overly dramatic smothered in an overbearing score.

Not only is the plot full of allegorical mumbo jumbo but it also rips off "The Omen" and "Damien: Omen II" to a great extent. Devil Child: Check. Devil Cult: Check. Bird attack: Check. Unexplained deaths: Check. Mother who doesn't trust her child: Check. Child that puts mother in the hospital: check. Ovideo... you're such a master of ripping off much better films.

The cast is wonderful which is typical of Ovideo G. Assontis productions but again it is far too silly of a film to warrant such a great cast. John Huston and Shelly Winters return from their Ovideo "Jaws" rip-off team-up "Tentacles" two years earlier. We also get Mel Ferrer (a veteran of cheesy Italian films) and even Lance Henrickson, playing a role very similar to his role in "Damian: Omen II". Hey, if you're going to rip off a film why not get an actor from the film you're ripping off to basically play the same character? Makes perfect sense to me.

I'm all for stylistic filming but not when it overtakes the story and makes it completely incomprehensible. This is truly a disaster of a film that is a mess from beginning to end. So much so that I highly recommend cult fanatics to see it! (The Code Red DVD is wonderful) The original poster artwork is even confused as it portrays a giant Eyeball hovering over a city with monstrous hands holding a piano wire as if it were going to sneak up behind you and strangle you, hitman style. What the hell does that have to do with the movie?

Written By Eric Reifschneider
Posted by Cronosmantas at 6:50 PM