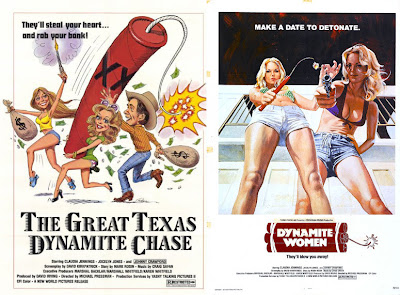 Alongside disaster flicks another proprietor in 1970s cinema culture was the outlaw chase flick. So with the "The Great Texas Dynamite Chase" we get a Roger Corman combination of "Vanishing Point" and "Bonnie and Clyde", substituting Clyde with another Bonnie for an earlier variation of "Thelma & Louise". That means it's an entertaining, low-budget B-movie with high octane chases mixed with two beautiful broads robbing banks with dynamite. Sounds like a explosive good time.

Claudia Jennings escapes from prison only to rob a bank with a stick of dynamite in order to provide money for her family. Along the way she picks up a partner in the form of Jocelyn Jones, a down on her luck woman sick of the boring lifestyle wanting to spice it up a bit. Together they race across Texas giving the local law enforcement a headache as they rob banks with sticks of dynamite.

All the expected Roger Corman production ingredients are in abundance, meaning action, humor and of course nudity. Yes stars Claudia Jennings and Jocelyn Jones do provide audiences with ample amounts of skin but don't let that fool you into thinking they were only casted for their booty. They actually have great chemistry together and provide the film with plenty of humor and even dramatic moments. Girls aren't left out either as they get their fair share of beefcake men flexing their biceps at the screen.

The film is also surprisingly well paced by film-maker virgin Jocelyn Jones who mixes up the exciting chase sequences with character 'exposition', humor and even shocking drama. Our two loveable characters get mixed up in all sorts of antics while escaping the law that will be sure to bring a smile to exploitation lovers faces.

"The Great Texas Dynamite Chase" is the type of film I would imagine that made going to the drive-in fun. Who says a film has to have a $50 million budget to be entertaining? That's why these old Roger Corman productions are so loveable as they are extremely entertaining on a shoe-string budget. He provides simple ingredients audiences loves and manages to hire competent young directors to deliver the goods, as with "The Great Texas Dynamite Chase". Fans of cult drive-in fare of the 70s are sure to want to hunt this entertaining gem down.

Bonus Rant: As with many Roger Corman productions "The Great Texas Dynamite Chase" was released with two separate titles throughout the United States. The other title is "Dynamite Women", a title I definitely like less. Ironically I prefer the poster artwork with the "Dynamite Women" title as opposed to the cartoonish poster artwork that coincides with the far more catchy title "The Great Texas Dynamite Chase." Go figure...

Written By Eric Reifschneider
Posted by Cronosmantas at 9:15 PM