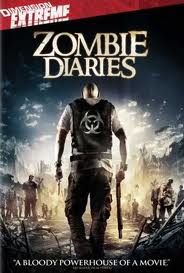 Although zombie films have become a staple of this horror generation's palate, there has been some interesting twists and turns into the regularly visited sub genre and how it has been explored. "The Zombie Diaries", for example, takes us down the handheld camera inspired "Blair Witch" path for an hour and a half. The aspirations are here and some clever ideas emerge, but "Diaries" easily falls short thanks to some amateur faults and a very, very low budget that leaves us with a film that makes "Diary Of The Dead" seem like award winning material.

Three stories of survivors during a zombie uprising in the countryside of England intertwine as three separate 'diaries' are played out via handheld camera. A group of documentary makers (convenient!) are witness to the first outbreaks, while a group of scavengers scour the city for supplies and a group of survivors hold up in a farm to fend off the hordes.

The idea for this film is fairly impressive. The three interweaving stories twist and turn in some unique ways as we are shown how the pieces of these tales interlock into one story. Although some of the ways it is edited and where the stories cut off are awkward and clunky, the idea is interesting. Along with this idea comes some well executed special effects (at times) to help the film push through and make the time pass.

I just wish they would have been able to execute it better.

The main issue with "Zombie Diaries" is just how boring it is. Nowadays, zombies run, vomit blood, and generally create a lot of chaos. This film decidedly takes the old school approach with slow moving creatures and isolation and owes George A. Romero some credit. Unfortunately, for this style to work anymore one has to have two things: tension and great characters. This film has neither. The handheld camera is a cost effective way to get the audience to feel 'in the action', but half the time I couldn't tell what was going on and the sacrifice of the artistic way of doing the film wasn't balanced off. The tension of the bouncing camera is annoying and ineffective here. Partner that with characters I didn't know or care about (and too many to really work some arcs with) and the movie just became a lot of irrelevant dialogue that bores and 'horror sequences' that are rarely horrifying as much as confusing. It is simply a frustrating experience.

There are people out there that love this movie. I am not one of them. I respect some aspects of the film, the makers certainly get an A for effort in trying some neat things with the interweaving stories and some solid special effects, but in the end, the film just doesn't work like it should. It drags on and never seemingly gets the connections where it needs.

Written By Matt Reifschneider
Posted by DarkReif at 12:28 AM