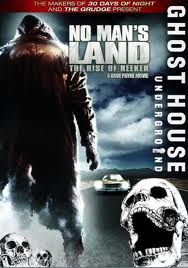 As if "Reeker" wasn't complicated enough with all of its loose ends and odd twists of plot, the prequel/sequel "No Man's Land: The Rise Of Reeker" certainly makes it even more complicated. In some ways, this second film is better and worse than the original and evens out to sitting at about the same level. Is it as clever as the original? Not at all, but it does have a bit better execution for the screen.

A local sheriff around Death Valley is about to hand off his role as chief to his newly appointed son. When a group of casino robbers turn up at the diner where they are having a peaceful lunch, things turn ugly. And smelly. Now a group of local townsfolk, our two police heroes, and some of these robbers are out to find a way to survive one another in a strange variation of the world...and survive the wicked mechanical wrath of...the REEKER!

The one thing that made the original one so watchable (use that term loosely) was its clever story and wicked twist. Since we already know the twist, this film seems rather boring by the time we get into it. Not to mention the film doesn't know if it wants to be a sequel or prequel with its first opening scene showing us how the Reeker came to be...sort of. Thanks for half answering one of my questions from the first one, sequel! It then of course jumps to present day, which must be after the first one considering how it ends, and sort of fucks with your time line a bit too much. What the hell is this? This gives us 10 minutes showing us how the Reeker came to be...sort of...and you can subtitle it "The Rise Of Reeker"? Misleading!

Since the story line and clever twist are not there, then it has to be better executed right? Well that's a sort of too. At least it doesn't look like a made for TV movie this time around. In fact, the acting (in general) has improved even if the characters aren't near as charming or well built this time around and the special effects have taken a few steps up. There is a wicked scene where a few characters find themselves bound to the area by invisible walls (one by trying to drive a car through it!) and the overall gore and kill scenes are a bit better even if some of them come out of left field. None of these are spectacular elements to "No Man's Land" but they do improve over the original in many ways.

So really, "No Man's Land" sort of reverses the strengths from "Reeker" and still isn't able to top it. It just sort of matches it and decides 'eh, that's enough'. Not a great film by any means, but once again not a horrible way to spend a night on the couch with a low budget horror film. Would have loved to see it try to add something even more to its twisty premise instead of some minor details.

Written By Matt Reifschneider
Posted by DarkReif at 1:18 AM