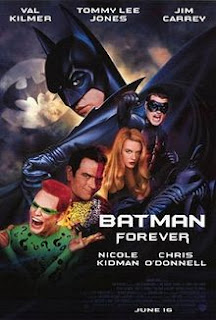 With the commercial success of "Batman Returns", but the critical firestorm of how dark it was and un-family friendly, the obvious direction for Warner Bros. to take the franchise was to be more comic book like. Thusly, "Batman Forever" is a stark 180 whiplash of visual proportions as it tries to retain some of the dark psychological elements, but embrace the ridiculous comic ideology that the TV show had. This leaves us with a film that is entertaining to watch (if you don't have problems with bright lights/colors), but never rises above being a popcorn film with no real bones to structure itself on.

Batman (now played by Kilmer) continues to struggle in finding a balance between his two personalities of Bruce Wayne and Batman. With the rampages of Two Face (Jones) threatening Gotham over and over as the diabolical and horribly dressed  villain looks for who Batman is, our hero begins to consider retiring. With the recently orphaned Dick Grayson (O'Donnell) now living in the manor and a new love on the horizon (a wasted Kidman), it all seems to point towards a more stable life without the dark knight. When a brilliant scientist, Edward Nygma (Carrey) discovers a way to suck Gotham civilian's IQ with a 3D TV (I shit you not) and it contorts his psyche into The Riddler, Batman must face the most intelligent villain he's ever known before he moves onto dastardly deeds.

"Batman Forever" certainly feels caught between two worlds. It still wants to be the character study film that the first two of the franchise were, particularly with Bruce Wayne's dilemma of his need for Batman, yet it wants to be the comic book hoot and wink at the audience that the TV show was. It never does find a balance. Yeah, it's fun, in sort of an eye rolling way (Batman's first line in the film is about getting drive thru with his Batmobile), but it's a rather hollow film in the end.

Most of the reason it feels hollow has nothing to do with it's over the top plot or Crayola vomit inspired design and look. It's the failure to give any of the characters any depth. Batman seems more like a one liner machine who occasionally looks torn and gives half assed speeches to Robin and both the villains are underused in their roles (although the casting is spectacular which only makes it worse at their lack of usage). The Riddler never seems to be all that clever in outwitting Batman and Two Face is diluted down into a gun wielding visual gimmick. The only one that seems to have any arc is Robin and his is obviously done as a subplot of basic outline. This is what makes "Batman Forever" so damn frustrating. Oh... there was a leading lady?

Otherwise, I suppose the film is a knee slapper. Not always in a good way, but it is hilarious. The colors and ridiculous plot elements make for a film no one can take seriously. Did the Batmobile just drive up the side of an apartment building with a giant grappling hook? I guess so. Did The Riddler just grab his crotch in front of the camera with a weird squeak noise? Creepy. Does the Batsuit have Batnipples? Awkward. The film is simply full of weird shit. It really is. Most of its rather nonsensical, but hilarious even if it is unintentional.

"Batman Forever" simply sucks compared to the first two. Fun to look at with its epic sets and seizure inducing color scheme, but not much more than that. It's relatively depthless and despite trying to add in some darker tones, it never blends. Leaving those of us who loved the first two wondering...what the hell just happened?

BONUS RANT: In the finale, Batman has to wear his new unfinished Sonar Suit to go face off with the villains and at one point the eyes get covered with a black shiny glass on the suit...but...nothing happens? What the hell? Was this meant to mean he could see in the dark? Why aren't we shown that? It's not dark! What the hell?! Why is the suit relevant then? Merchandising?
Posted by DarkReif at 8:16 AM