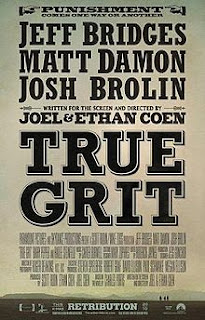 Although being raised on classic westerns has given me an affinity for John Wayne and his films (as I'm sure is obvious from my brother's penchant for the general genre), remaking "True Grit" seemed like a questionable decision. The only reason this film found its way into my viewing queue is the fact that it's directed by modern geniuses the Coen Brothers and despite some amazing performances and directing the film still feels rather...unfinished as a story. As if it could have gone even further with its tale of western woes and pushed even further into dramatic territory.
Mattie's (Steinfeld) father was killed in cold blood by one of his workers, Chaney (Brolin). She has decided to take her fathers affairs and finish them off. Picking up the horses he is owed. Making sure he gets proper burial. Hiring a liquored US Marshall Rooster Cogburn (Bridges) to head out into the wild to find and bring Chaney to justice. She partners up with the Marshall and a Texas Ranger (Damon) to track the notorious man through the west.
One cannot deny the power of this film in its executions. Behind the scenes, the Coen brothers craft a film of riveting shots and glorious vision. They know how to make a film work and they do their thing with "True Grit". It's got a snap pace to ride out and there is great banter for dialogue that displays the brothers ability to add awkward humor to most dramatic moments. "True Grit" also utilizes a stunningly well placed score of church music and tension building atmosphere to partner with the visual prowess.
To match the Coen brothers amazing directorial talents, are the onscreen acting talents that are displayed by a more than impressive cast. Our little lady lead handles the role with pride and unrivaled confidence. She is matched by the somewhat throw away performance by Matt Damon and both are shadowed by Jeff Daniels as the infamous Rooster Cogburn. Daniels easily shames the other two (and the relatively ill developed cameo of Josh Brolin) with a stunningly solid and well detailed show for the co-protagonist. Although John Wayne earned his Oscar for his performance of the same role, Daniels even buries that performance.
The reason this amazingly executed film doesn't get the illustrious five out of five here at Blood Brothers is that despite the illustrious performances from the cast and Coens, I kept waiting for the film to kick it up to the next level plot wise. Waiting. And waiting. It never really came. Yes, it's a complete story, but I kept waiting for more emotional relevance. Something to bring the tears to my eyes as a dramatic tale. It never came about. There is an attempt at this epiphany in the final moments of the film with a denouement of our lead as an older women, but it feels tacked on and relatively out of left field. Might as well have done a voice over and just been done with it.
"True Grit" is a great western. One of the best. It's not a perfect film. It still fails to truly make that connection with its tale of western woes even though it does its damnedest to with some riveting performances and amazing directing. Leaving another great film for the Coen brothers, but not one that was going to sweep out the rest of its competition.
Written By Matt Reifschneider
Posted by DarkReif at 11:11 AM