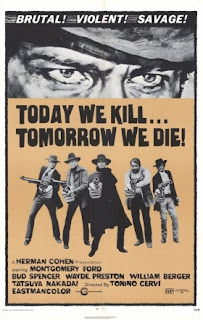 This Spaghetti Western garnered my attention as it was scripted by visionary director Dario Arengto who would later lay claim to fame with is stylistic Giallo pictures. It's a damn shame Dario Argento didn't script more westerns as every one he touched is either epic greatness , as with "Once Upon a Time in the West", or just plain and simple admirable, as with "Today We Kill... Tomorrow We Die!" (released in the U.S. with the more forgettable title "Today is Me... Tomorrow You").

We open with a young man getting freshly released from five year stint in prison for a crime he didn't commit. He holsters up, bribes six quick drawers with ten grand each to aid him in his search for the sadistic gang leader that killed his women and set him up.

The plot is the a typical revenge fair aided by healthy dose of "The Magnificent Seven", or perhaps "Seven Samurai" would be more appropriate due to the presence of Tatsuya Nakadai who would gain fame from appearing in Akira Kurosawa's "Kagemusha". Argento mixes the elements well including little nods to "For a Few Dollars More" with Nakadai's villainous character and "The Good, the Bad and the Ugly" in which a scene where Brett Halsey buys a pistol is eerily complementary to the famous scene where Eli Wallach obtains his pistol.

Relatively unknown director Tonino Cervi does well and keeps the film moving at a nice pace with it only dragging at a few moments. I do like how he atypically sets the backdrop of the film in a deciduous forest in the fall with the ground covered in leaves as opposed to the blasted desert landscapes of Spain. It's nice every once in a blue-moon for the filmmakers to give the audience a different landscape to keep the films fresh.

The ensemble cast is far better than the average Spaghetti Western. Underrated American actor Brett Halsey (under the pseudonym Montgomery Ford) leads the cast but is overshadowed by the presence of "heavy" weight Bud Spencer and of course the presence of Tatsuya Nakadai and his piercing eyes. Spencer gives one of his rare non-comedic performances so his die hard fans might be disappointed by his more serious potrayl. William Berger also makes an appearance as one of the seven gun slingers but fans of his might find it disappointing that his role is rather small with little dialogue.

So does "Today We Kill... Tomorrow We Die!" live up to the Dario Argento co-scripted "Once Upon a Time in the West"? Well no but does any Spaghetti Western? That's the crème-de-le-crème of the genre so a comparison is hard to make but on its own "Today We Kill" is a solid Western with an entertaining revenge plot and a strong cast to boot. Definitely a must see for fans of the genre.

Written By Eric Reifschneider
Posted by Cronosmantas at 9:09 PM