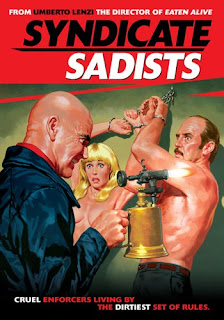 Seven years before the Sylvester Stallone picture "First Blood" made Rambo a household name, Umberto Lenzi cashed in on the name from the "First Blood" novel for the name for his protagonist in his Euro Crime film "Syndicate Sadists", the second paring of Lenzi and Italian superstar Tomas Milian which would continue on for a total of six films.

Milian is a scruffy drifter that rides his motorcycle into town to visit an old friend. His buddy cokes him to join a citizen police brigade but it only serves to get his buddy dead. Rambo gets pissed and decides to get revenge on the two warring gang families in the area, pulling a Yojimbo and pits the two families against one another until only Rambo is left standing after the bloodbath.

Umberto Lenzi was definitely inspired by Leone's "Fistful of Dollars" (itself being un unofficial remake of "Yojimbo") for the plot. Substitute a horse for a motorcycle and the wild west for a "modern" 70s urban environment. Still it's not a complete rip-off as there are many plot elements that are unique in its own including a child kidnapping.

Milian brilliantly portrayed a skuzzy, sadistic creep in Lenzi's "Almost Human" the previous year so he wanted to clean up his image a bit and portray a hero. Sure his character is more caring and empathetic but it he still has the lovable eccentricity that only Milian can so brilliantly portray. Milian will always be one of the most underrated actors of all time in my humble opinion and he greatly helps the film rise above many of its flaws.

Lenzi with his usual stylistic approach gives audiences plenty of violent shootouts and car chases to quench their appetite. However the plot seems stretched a bit with a lot of padding to get the film to feature length. Milian sometimes meanders with no real goal, but thankfully we got Lenzi to throw in a brawl or two to keep people interested.

Compared to Lenzi's other crime outings such as "Rome Armed to the Teeth", "Violent Naples" and the magnanimous "Almost Human", "Syndicate Sadists" comes up a solid step below. It's like a marine recruit that just cant get his chin over the bar for that first pull-up, though he gets close. The plot is unoriginal and there seems to be a lot a filler that is thankfully made up for with some intense action scenes. Not a bad Euro Crime film by any means but from director Umberto Lenzi this should have been so much more.

Despite being one of Lenzi's lesser Crime outings, "Syndicate Sadists" is actually one of the few to actually get an officially licensed DVD release here in the United States thanks to Shriek Show. I always find it ironic that many of the genre's best films still have yet to make it state-side, which is damn shame.

Written By Eric Reifschneider
Posted by Cronosmantas at 8:37 PM