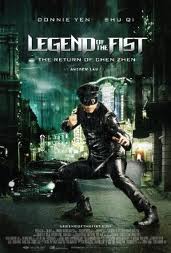 Is it just me or does it seem like Donnie Yen is taking over the Martial Arts film world? The guy has been putting out some seriously awesome films lately in all kinds of forms. This is the main reason why "Legend Of The Fist: The Return Of Chen Zhen" was on my viewing list. Although it wasn't quite the impactful film I wanted it to be, the sheer awesomeness of the fight sequences and visual style make it a sound watch.

Chen Zhen (reprising his role from the TV series by Donnie Yen) has been around the world fighting for justice and humanity. When he returns from France to Shanghai in 1917, he assumes the identity of a fallen comrade to continue to fight the oppression of the Chinese people from the invading Japanese. With a group of freedom fighters in tow and a new secret identity to help him stay hidden, Chen Zhen finds himself on the brink of adding a unity to his people. To get to it though, he may just have to face an old foe from his past.

Directed by Andrew Lau (who gave us the phenomenal "Infernal Affairs"), "Legend Of The Fist" certainly has a charm to its visual style that works. The blending of 30s Western and Easter cultures for the look of the film makes for some vibrant landscapes and Lau uses it to full advantage. Although at times the rather clunky and confusing pacing (which makes the story of spies far too confusing on first watch) hinders the greater storytelling aspects, the general look and style of the film is well done. It paints an interesting portrait of the feelings of the period and this foundation works well here.

Of course, one doesn't go into a film like this just for Lau's directorial abilities. We want to see Donnie Yen kick ass and do it as mightily as possible. Although there were far less action sequences than I expected, he does just that. Choreographed by Yen, the first two thirds of the film really pile on some solid modern Martial Arts action. Yen ably balances his subtle acting abilities with the sheer awesomeness of his fighting abilities and Lau's modern eye for updating the genre, the film can really bring some brutal fighting. The sequences are a bit ridiculous and over the top at many points (like the high flying knife slaughter in the opening sequence), but it works. The reason it works is because the first two thirds of the film feel like a superhero origin story. Not exactly what I expected, but it feels like a transitional film for bringing the Chen Zhen character into a whole new mythos. If so, then count me in.

The highlight of the film is neither the visual style nor the action in the first two thirds of the run time. Nope, it's the final act of "Legend Of The Fist". Reminiscent of older kung fu films, the style of the third act takes a dramatic and well executed shift into a classic style kung fu film. The final stand off takes place in a dojo (like Chen Zhen's first rise against the Japanese) and it harkens back to the style and story that made Zhen's character great to begin with. Vengeance and sheer martial arts brilliance. I won't give it away, but let's say its a nut punching good time.

I desperately wanted "Legend Of The Fist" to be as good as "Ip Man 2" or better, but alas some odd pacing problems and a rather confusing plot hindered the overall experience. Luckily, it does overcome most of it with some great acting, a solid visual director, and fight sequences impressive enough to earn Yen even more genre points. Chen Zhen's return may not have been perfect, but the path this film indicates could lead to a beautiful friendship.

Written By Matt Reifschneider
Posted by DarkReif at 9:13 AM