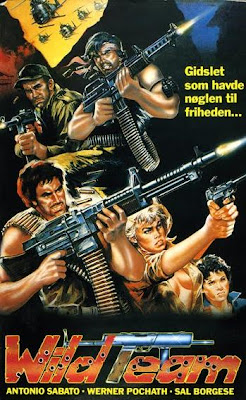 Out of all the directors who's film product declined in the 80s, Umberto Lenzi had to be one that was hit the hardest. This guy directed some truly great Italian films in varying genres throughout the 60s and 70s. When the 80s came round he pumped out some hilarious yet fun trashy films like "Nightmare City" and "Cannibal Ferox" but after that we get stuck with films like "Bridge to Hell", "Black Demons" and of course "The Wild Team".

The Wild Team is a small group of mercenaries who are hired by a rich political leader to go into the jungles of the Philippines and rescue his kidnapped son. Predictably the rescue isn't as easy as planned.

Not much to say about this one. The characters are all dull and boring, the action is dull and boring despite hundreds of bullets being fired and Lenzi's direction is truly uninspired. Extremely bad dubbing is just more salt in the wound.

All I can praise this film for is that it's a Macaroni Combat film that doesn't take place during the Vietnam War or World War II so for that it was a breath of fresh air. The poster artwork is also appealing. I truly love poster artwork of 80s Macaroni Combat films with all their hand drawn and painted cheesiness. We get overtly exaggerated muscled soldiers firing machine guns and rocket launchers under eye catching taglines like "When you're going into hell it's a good thing your daddy is the devil..." and "Shoot first, ask questions... never". Sadly, like most of the other 80's Macaroni combat films, the cover artwork is much better than the actual film.

This Macaroni Combat film is extremely hard to find and rightfully so as it's not a good film, not even to laugh at unlike Lenzi's cult classic "Nightmare City". It took me two sittings to get through the damn thing. It was never released in the U.S. and the DVD transfer is taken from an obscure Japanese VHS with burnt in Asian subtitles. Even the most hardcore Lenzi fans will be disappointed with this one.