Children of the Corn IV: The Gathering - 2/5 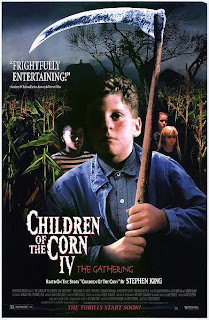 The series was getting a little ridiculous with the last two entries so filmmakers decided to get back to the "Children of the Corn" basics and ignores all plot elements of the previous films and makes a "one off" in the series with a completely unconnected plot and a more serious tone. Is this why the title card in the film conveniently forgot the roman numeral "IV" to disconnect this film from the previous sequels? Nah... I just think it was a fuck-up by the title sequence creator.

College student Naomi Watts returns home to her small Midwestern home town (not Gatlin like in the previous films, it's a different town but the name escapes me) to help her delusional mother and younger siblings. Shortly after her arrival all the children in town come down with a fever and start losing teeth and going homicidal. It seems the spirit, ghost or whatever the fuck you want to call it of a dead child preacher has taken possession of the children to get vengeance.

I have to admire the filmmakers for trying to make the "Children of the Corn" franchise "scary" again (was it ever really scary?) with its more serious approach but the plot is so damn cliché it still hardly makes it worth watching. The film has predicable kills and gore and the ghostly preacher child is nothing more than Freddy Krueger clone by mixing reality and dreams...

...dreams, now that's an aspect this film goes way fucking overboard on! I lost count how many times and how many characters woke up from nightmares, or even dreams with in dreams. Okay... enough with the false dream scare bullshit!

Greg Spence tries to get around the cliché script with some nifty camera work and style and his style saved the film for me as he made it visually interesting enough to keep watching. It was also nice to see genre actor Karen Black make an appearance and she gives a good performance as the delusional mother going psychotic from her nightmares.

For the first entry in the series to go direct-to-video this surprisingly outdoes the uber silly and dumb second and third entries thanks to a more serious approach and some nice visual style (cutie Naomi Watts doesn't hurt either) but the cliché plot only makes this a must see for genre enthusiasts only. For me this is hands down the best sequel in the franchise... but then again that's not saying much.