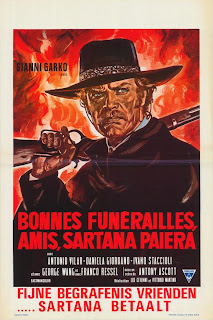 The Sartana series is turning into a full blown franchise with this third entry (preceded by "If You Meet Sartana... Pray for Your Death" and "I Am Sartana... Your Angel of Death") and a great one at that. The more of these Sartana films I watch the more he is becoming my favorite Spaghetti Western anti-hero. Sorry "The Man with No Name" and "Django".... Sartana is cutting you guys down to size.

Well Sartana witnesses as brutal massacre, kills the bastards that cold heartedly massacred a family and decides to investigate into it. Why? Not sure... maybe he's just a nice guy? Well he finds out some shady business deals or going down for the murdered man's land and it's up to him to convince the man's daughter not to fall for their dirty deals.

The problem with this plot is it's becoming evermore convoluted and needlessly so. The second entry suffered from this to an extent but here it is full blown. For a basic simple plot the writers take many weird twists and turns and confuses the audience in the process. No drinking during this film if you want to get what's going on... hell you might even want to take notes.

Gianni Garko again returns as Sartana and by this, his third time, he has the role down pat. He could play this part in his sleep he's so damn good in it. Calm and cool as always, confident, great with the ladies and lethal as ever. I also enjoy the fact that his character doesn't shy away from talking like most other spaghetti western anti-heroes. Fans may notice that his appearance has changed a bit as gone is the five o'clock shadow and in its place is a longer mustache. The mustache isn't as badass or as intimidating as the gritty whiskers but I digress as actions speak louder than facial hair.

Director Giuliano Carnimeo again handles this sequel (the second he's directed in the series) well by giving it some well staged action sequence. My personal favorite is a coffin wagon chase. Along with the action is the return of the tongue-in-cheek humor, just enough to not be overbearing. Here he decides to do away with the "disappearing magic tricks" Sartana played in the second film and opts to have Sartana be deadly accurate by throwing playing cards. I'm not shitting you as he can knock guns out of hands and even throw cards into bibles at the exact Psalm he wants the villain to read. Silly... you bet but badass none-the-less. Gambit eat your heart out.

The films more convoluted plot and lack of interesting side characters (the returning grave digger from the original doesn't cut it) made me enjoy this sequel a hair less than the previous two but for a third entry this is a solid sequel and fans of the franchise should be very pleased with it.

Sartana will return in "Light the Fuse... Sartana is Coming"