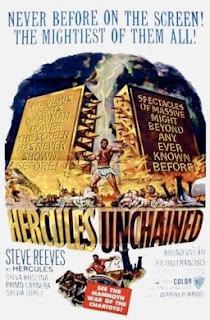 With the 1958 version of "Hercules" being a worldwide success, it didn't take long for filmmakers to return with a sequel as "Hercules Unchained" followed the next year with beefcake actor Steve Reeves returning to the role that made him famous.

This sequel set up a formulaic plot that would be the model for many "Hercules" cash-ins to follow. What we got here is two women striving for the affection of our muscle bound hero. We get Hercules' wife returning form the first film and an evil queen who has taken control of Hercules' home city of Thebes. When Hercules travels to Thebes to stop the evil taking over, he loses his memory due to a spell and an evil queen convinces him that he is her husband. Now it's up to Hercules' real blond bombshell of a wife and friends to bring back his memory and in turn taking the evil corruption of the city down.

What helps this sequel is that most of the cast and crew from the original return (including future director extraordinaire Mario Bava as the director of photography). Because of this the film feels exactly like the first and only comes out being a hair worse, but not enough for me to knock down it down a star rating.

The plot and acting is unintentionally laugh enduing (enough for Mystery Science Theater 3000 to take a stab at mocking it) but compared to all the other peplum films that infected drive-ins at the time this is far ahead of the pack and is definite one of the highlights of the genre. Trust me if you think this film is bad, pick up a value pack of peplum films and you will find that I'm right in thinking so.

If you enjoyed the original then there is no reason you shouldn't enjoy this sequel which follows in the same mold. It's got the same messy plot flow, the same silly dialogue, the same beefcake hero, the same curvy heroine, and same cheese effects and the same wonderful photography of Mario Bava.

Like its predecessor it was also a worldwide success and more official sequels were planned but actor Steve Reeves bowed out wanting to branch his horizons by taking on different roles... you know other muscle bound Greek mythology heroes. Way to branch out Reeves! Though no more official sequels were to follow a shit ton of unofficial ones did giving other body builders a chance to get their faces and pecks to appear on the big screen. Some consider the films "Hercules and the Captive Women" and "Hercules Against the Moon Men" to be "official" sequels but alas they are not and the quality of those cash-ins are an insult even to Steve Reeves two official B-fantasy epics.

Note: Like the original this film is in the public domain and many varying quality DVDs are available. I own the film both in a Mill Creek multifilm pack entitled "Clash of the Olympians" and a double feature from VCI with the first "Hercules." Both are full screen but the Mill Creek version has the scope screwed up making all the characters look skinny and tall. The VCI version is superior because at least the full screen transfer is framed properly.