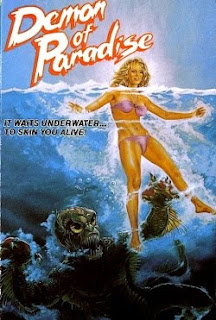 Filipino director Cirio H. Sangiago only directed two horror films in his entire, long winded career.... both awful. Sure his action films, ranging from D grade Vietnam war flicks to post apocalyptic stinkers, were hardly good but at least had some entertainment "quality" to them, however trashy the entertainment value may be.
Not his horror outings my friends as these can be a chore to sit through.

"Demon of Paradise" is late 80's "Creature From the Black Lagoon" rip-off which is a loose remake of previous Roger Corman productions "Up From the Depths" and "Creature from the Haunted Sea." It seems dynamite fishing in Hawaii awakens an ancient reptilian creature who decides to make mince meat out of local tourists at a vacation resort. Now it's up to a local sheriff and scientists to kill the creature.

The story is tired and weak being done thousands of times before and Cirio knows it as he seems tired and sluggish himself behind the camera as he attempts to direct our lifeless actors. He gets so bored with the subject matter that he even gets use of the Vietnam soldier uniforms he utilized in his umpteen Vietnam War epics to spice the film up by having the "National Guard" come in and attempt to blow this monster to kingdom come.

The monster suit is pathetic to say the least. Hard to believe that suits from horror films made thirty years before have FAR better and actually realistic looking suits. Despite the monsters hilarious image it still manages to be seemingly indestructible taking infinite bullet shots and even pulls a "Jaws 2" and takes a helicopter down into the water. I will admit the helicopter scene did get me to crack a smile.

Perhaps even worse looking than the monster suit is how the filmmakers try to pull off the Philippines setting as Hawaii. They pulled it off in "Up From the Depths" as they actually filmed that film on ocean shore beaches. Not here.... it's on the muddy rivers of the jungles. Hell I expected Martin Sheen to tug by on his military boat. Hawaii.... hardly.

Obscure monster film and obscure for a reason. "Up From the Depths" had some B-movie charm about it but "Demon of Paradise" just seems like a waste of time. Thankfully it was released on DVD in a double feature with the afore mentioned film so the purchase wasn't a total wash.