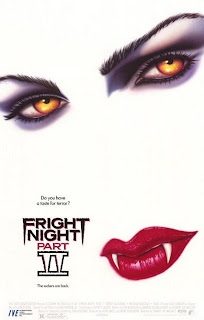 "Fright Night" was a huge success in 1985 and the 80s being the decade for sequels it was no surprise a follow-up was soon to hit theaters. Like most sequels it has big shoes to fill in comparison to the first entry and though not as good, to be honest this isn't a bad sequel at all and deserves a little more credit than most horror fans give it.

After slaying the vampire neighbor Jerry Dandrige, our teen horror film buff/vampire slayer Charley Brewster (William Ragsdale reprising the role) is in therapy and his therapist has convinced his feeble mind that it was all in his head. Brewster, now in college, has a smokin' hot and school focused girlfriend in the form of mega-hot Traci Lind (damn all that hair is sexy!) but becomes tempted to the dark side by a seductive bloodsucker (Julie Carmen) that just happens to be the sister of the previous vampire he slayed. Aided by numerous minions (including a werewolf type..err bloodsucker if that makes sense) it's now up to his girlfriend and his old partner in crime horror film host Peter Vincent (Roddy McDowall, also reprising the role) to save him from a bloodsucking fate.

What makes this sequel work is the chemistry between Ragsdale and McDowell which seems as fresh as the first film. Julie Carmen is also good replacement for Chris Sarandon being just as charming and sensual, just this time in the female form. The plot, typical with sequels, is essentially a carbon copy only changing the location and the vampire to a female so don't go into this expecting anything really new.

Director Tommy Lee Wallace, earlier protégé of John Caprenter, takes the reins of this sequel. Wallace, in my eyes, is a second rate horror director. Not bad mind you but he seems the go to guy to direct sequels (he also directed "Halloween III" and "Vampires 2"), films without much originality. He does a decent job but he lacks the finesse to the subject matter that Tom Holland so brilliantly displayed in the original.

The plot also has a few moments that tend to annoy me. There are a few plot twists, especially one involving the therapist, that grate my nerves and I really despise the vampire chick on roller skates. Really?! I'm sorry but no matter how good the makeup effects are vampires on roller skates AREN'T SCARY!

Despite some plot elements that annoy me and for the fact and film starts to lose steam towards the end, "Fright Night Part 2" is still overall an enjoyable sequel that may not knock the socks of fans of the original but will definitely be worth a watch for the reteaming of Ragsdale and McDowall and the nifty special effects.

The out-of-print Artisan DVD release for the film is one of the most highly sought after OOP discs for collectors. I originally bought mine for $10 and sold it for $60 assuming it was going to come back into print. BIG MISTAKE. Two years later I had to shell out $40 to rebuy the damn thing but I still made a $20 profit. Good thing I rebought it when I did as it has really jumped in price and a re-release doesn't look like it will be anytime soon as there are copyright issues between Lionsgate Films (who bought out Artisan) and the film's co-production company Sony (under their Tri-Star branch). Hopefully this problem can be resolved soon so fans don't have to pay exorbitant prices for this not-too-shabby sequel.